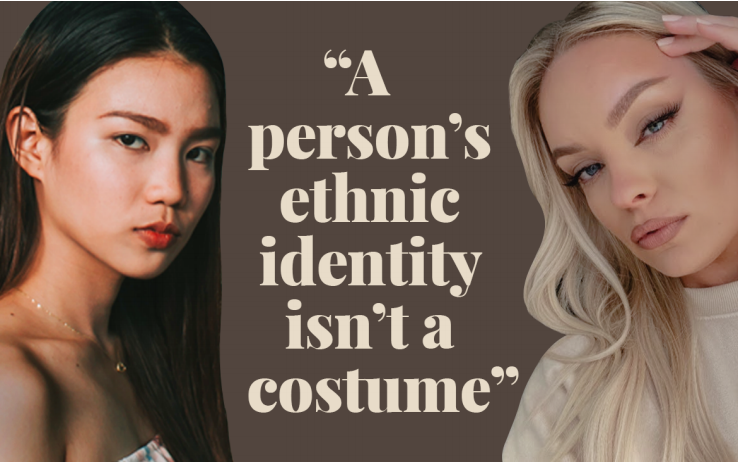 Social media influencers are flooding our screens with the hottest new trends in fashion and makeup. Every month there seems to be a new look to obsess over. This month’s trend is based around achieving a more narrow, almond-shaped eye- the “fox eye.” The influencers promoting the “fox eye” look claim that their goal is to achieve a slimmer eye shape, but the only thing I can see is the face of someone culturally appropriating the natural eye shape of the Asian community.

Cultural appropriation. Often misused, the actual meaning of this phrase is the borrowing or adopting of elements from another culture, usually by a more dominant group in society. While it may result from the desire to incorporate specific styles or appearances from different parts of the world, appropriation is almost always the outcome of ignorance. Instead of trying to learn more about the meaning behind aspects of the borrowed culture, people use them as costumes or unknowingly mix two items from two completely different cultures.

The “fox eye” is achieved through several methods: shaving and reshaping the eyebrow to appear more straight, using eyeliner to extend the corners of the eyes and pulling back pieces of hair or the temples of the head to stretch the eyes. While each method holds its own level of insult, when people pose for a picture while stretching their skin back from the temples it is by far the most offensive. Often used to make fun of Asian eyes, people would pull their eyes or temples in different directions, each way mocking a different Asian ethnicity.

In the 1960s and early years of Hollywood, makeup artists would use techniques to create white-washed Asian characters in a process now known as yellowface. These narrow eyes, a trait of most East Asians, were part of the pattern of discrimination against Asians. It is important to note that what is now seen as beautiful today, by people such as Kendall Jenner or Megan Fox, was once seen as something to make fun of and slander.

Unfortunately, this recent trend isn’t the only instance of Asian cultural appropriation in the entertainment and fashion industries.  In 2016, Gucci was ridiculed for dressing white models in Sikh-style turban. Two years later, Dolce & Gabbana was accused of cultural appropriation of Chinese culture in one of their online campaigns by people on social media. The campaign video exaggerated Chinese stereotypes, and when a fashion blogger called the brand out they responded to the blogger with “eat dogs.”

In 2013, pop stars Selena Gomez and Katy Perry were accused of a similar form of appropriation. In one of her music videos, Gomez wore a traditional bindi, a decorative forehead mark that holds both traditional and religious significance in Hindu culture. Perry was involved in a similar situation when she dressed in geisha fashion and combined both Chinese and Japanese culture in her offensive and insensitive AMA performance.

It is inevitable that cultures will influence each other. There is a difference between cultural appreciation and appropriation. Appreciation respects the culture and understands how to use elements of that culture in an appropriate way. However, it is absolutely necessary that, when we borrow these elements, we show respect to their origins and cultural significance. A person’s ethnic identity isn’t a costume that one can put on and take off at their leisure.