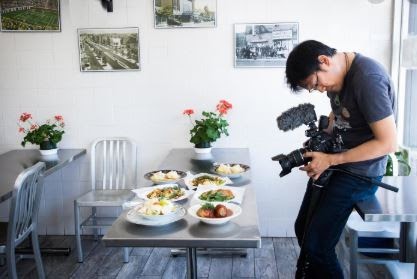 To the average person observing mainstream Hollywood, Asian representation seems  to be growing. From movies like “Crazy Rich Asians,” which reached $238.5 million in box office revenue, to “Parasite,” which won a Global Globes award and has been nominated for the Best Picture Oscar, Asian Americans are finally seeing success in media. However, Diamond Bar High School class of 2001 alum James Boo isn’t so impressed.

As an independent filmmaker, writer and podcaster, Boo is more concerned with telling stories from underrepresented voices that are meaningful to him. His current project, a podcast called “Self Evident,” invites guests to talk about what being Asian American means to them. Boo ultimately hopes to have his show aired on public radio, where the lack of Asian American voices is troubling.

“I didn’t really hear any Asian American stories that I felt were really true and genuine and complex,” Boo said.

Boo and his team of six have just wrapped up “Self Evident’s” six episode pilot season, but the process of getting there wasn’t easy. He spent a year developing the idea, pursuing initial funding and finding others to work with who shared his vision. Stories featured on the show can range from historical tales to community conversations, and personal narratives. Now with the support of the Corporation for Public Broadcasting, the Center for Asian American Media and the Ford Foundation, Boo is continuing his goal of making the podcast an ongoing series.

Prior to “Self Evident,” Boo graduated from UC Berkeley with degrees in Political Science and Russian. After working as a freelance writer for online publications, he focused on a web based docu-series called “1 Minute Meals.” The series consisted of over 60 one-minute clips portraying uncluttered, intimate portraits of restaurants in New York City. Boo taught himself how to film, edit and produce the series as a one-man videography team. He says that living in Brooklyn gave him countless opportunities to further his craft.

“It’s a really good place to learn things fast because there’s such a great number of people who are also learning new things and trying new things,” Boo said.

Much  has changed since Boo first became  hooked on podcasts after listening to NPR’s “Planet Money” in 2008, but public radio still hasn’t dedicated a show to Asian American stories.

Boo’s approach to including underrepresented voices behind the scenes as well as on the stage has garnered support from other people of color in public radio.

“They know that what we’re doing the public radio system won’t do,” Boo said.

Boo notes that many of public radio’s executives are still white men, who think that focusing a show on Asian Americans is a risky business venture. Rather than try to convince them otherwise, Boo’s team is taking matters into their own hands.

“We’re not going to wait around for that to happen, we’re not gonna work our way up some other ladder in the hope that someday we get the chance to do the same thing we’ve wanted for 15 years,” Boo said.

The responsibility of convincing local radio stations and distributors to air these Asian American stories lays solely on Boo’s team despite their inexperience and lack of funding compared to other well-established public radio shows.

“Everything I’ve ever appreciated and understood to be meaningful in the world didn’t come from corporations or organization, they all came from other places, from communities just deciding to give it a shot even,” Boo said.