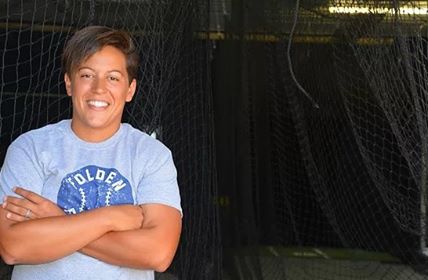 Although the 2020 baseball season remains uncertain,  Diamond Bar High School alumnus Rachel Folden already has made her mark in the minor leagues this year.

The 2004 graduate has been named to the team of hitting coaches working with minor league players in the Chicago Cub organization. She will serve as a hitting-tech for the team, helping players  improve their batting  mechanics. Because of COVID-19, a decision on whether a minor league season will be played in 2020 is still pending.

“Honestly, I think it should have happened a while ago,” Folden told  the Chicago Tribune when she was hired in November 2019.

The 32-year-old  was hired  after  founding Folden Fastpitch, a company providing baseball and softball training in 2010, along with partnering  Elite Baseball, where she  provides hitting consulting for athletes at various levels.

After playing softball at DBHS, Folden  was a four-time  Division I All-American athlete at Marshall University, where she holds the university record for batting average, .405. Folden was also recognized for her academics  while pursuing her bachelor’s degree in history.

“I have wanted to be a teacher since I was young, and when I was in college I realized my passion for teaching could be best served as a coach,” Folden said via email. “Coaching is teaching, just with a different medium.”

She first coached softball  at  Valparaiso University in Indiana and later at Encinal High School in Alameda, California, where her team finished fourth in the Bay Shore League.

Folden said she hasn’t  let being a  woman in a male-dominated sport be  a setback. This year was also going to mark the first female hitting coach in the major leagues–Rachel Balkovec with the New York Yankees.

“I think most industries are male dominated, with a few exceptions, so it really isn’t much different,” Folden said via email. “Athletes are athletes, we just have to figure out how to communicate with them effectively, person to person.”

While in high school, Folden earned many honors, including being part of All-League both seasons while playing varsity softball, All-CIF in her senior year and being chosen for  the San Gabriel Valley Tribune all-area softball team. Although Folden had many achievements, she also doesn’t forget her struggles in sports.

“The first travel softball team I tried out for told me I wasn’t good enough,” Folden said via email. “I was [also]  told I couldn’t play baseball anymore–I played Little League–because I was a girl and girls play softball.”

With both good and bad memories in high school, Folden said she looks back on the positives.

“I remember getting to school early, and going to Denny’s with my teammates before school started to get a $2.99 grand slam,” Folden said via email. “I also miss the bus trips to games where we sang and danced.”

Despite enjoying  participating in high school sports, she regrets that she didn’t get involved with other opportunities DBHS had offered.