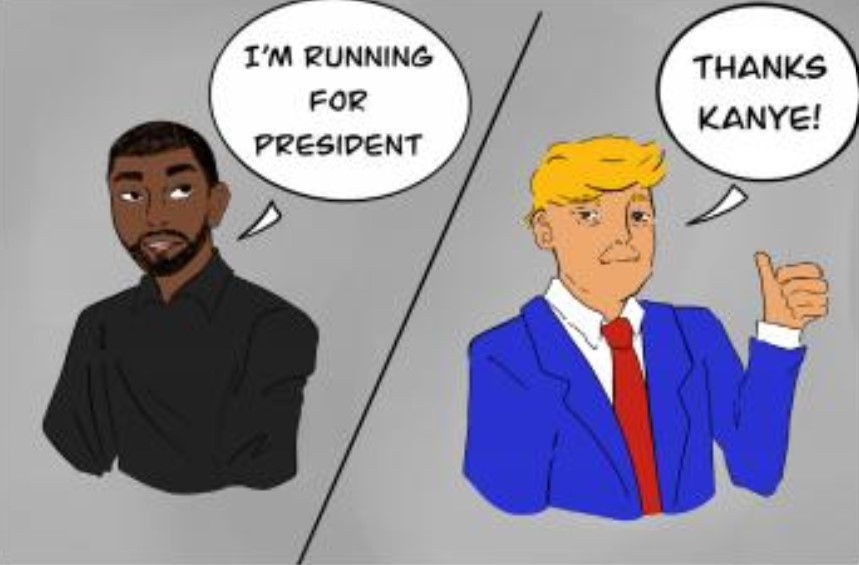 When I look at the list of candidates for president, only one name inspires me with hope for this nation. No, it’s not President Donald Trump, nor is it former Vice President Joe Biden. It’s none other than famed rapper Kanye West. After all, with backers like Tesla CEO Elon Musk, how could I not vote for him?

Even though he’s just started his political career, West already given so many inspiring speeches about everything America is worried about right now: like abortion, gun control and addiction. While some of his stances may seem a little unrealistic, like giving $1 million to every single mother or ending the separation between church and state, I’m such a loyal fan of his music that how could I not support him.

Even his choice for vice president, Michelle Tidball, has brilliant ideas: she stated that the best way to treat mental illnesses is to do chores. West has also talked about his deals and contracts with both Adidas and GAP, topics that should obviously be prioritized in a presidential campaign speech. His contract with Adidas is especially significant, as I would never vote for anyone who supports Nike.

Out of everything he’s done, West’s campaign tour is the most compelling reason to cast your ballot for the rapper. He arrived at his tour sporting a bulletproof vest, showing his foresight and attention to security, valuable skills for a president. This alone was enough to make up for the lack of social distancing at his rally, but it is unrealistic to expect him to get everything right.

Some people might think that his lack of a microphone was thoughtless, but I think it’s a great strategy–it made the event feel more natural. It’s alright if I didn’t hear anything he said, since I can check his Twitter for campaign updates anyways.

Technically, West isn’t on enough states’ ballots to become president. However, he is still seen powering through this obstacle, with the encouragement of his rival and supporter President Trump, and continuing his campaign, doing anything to keep it going. So regardless of whether he can “legally” become president, I support him for his great music, not to mention that he’s God’s chosen candidate (at least according to West–and why would he lie?)

Surprisingly, West is an advocate for the anti-vaccine movement, and he has brought up several enlightening theories regarding it. He once claimed that the coronavirus vaccine will be used to insert microchips into people to track them during everyday life. He advises people to stay away from any COVID-19 vaccines that might come out, showing his empathy for the people.

As for his backers and funding, West is a self-made man. That’s why he donated $6.7 million to his own campaign, just to top off the staggeringly immense sum of $12,000 he’s raised so far.

Sadly, though, this amazing candidate was removed from the Virginia presidential ballot for rather silly reasons, like fraudulent documents. It’ll all work out for him, though, because so far he’s on the ballot in Kentucky, Arkansas, Idaho, Iowa, Tennessee and Utah.

For some strange reason, West was also booted from Arizona’s ballot, supposedly because his appearance would create confusion for voters. Alongside this ridiculous excuse, they also claimed that his documents are illegitimate, which is completely uncalled for and probably unproven, too. After all, who wouldn’t trust the great rapper and promising presidential candidate Kanye West?