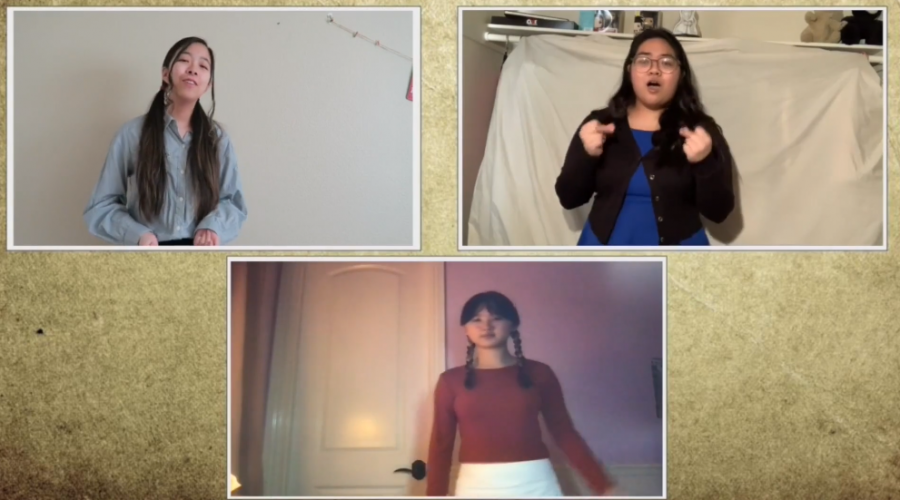 In a performance of “A Christmas Carol,” Diamond Bar High School Advanced Drama had to use many workarounds in order to make scenes flow naturally and seamlessly. Despite this, the team offered a production of the classic holiday play following the cold-hearted Ebenezer Scrooge with a unique twist.

In order to remedy performers’ inability to be on the same set, the story is presented in the format of a radio talk show.

The play was accessed via a website that played the 45-minute video performance. I feel like this was a very good choice, as opposed to the usual livestream that many performing arts use, as the show did not have any major technical problems.

Only when actors were dancing did they appear on screen, while the majority of the production featured just the audio portion of actors’ performances. This did make it a bit difficult to fully immerse myself in the story as I could not see what was happening.

The dances were shown as webcams of each dancer all together on one screen performing in sync. This made the performance feel as close to in person as possible while also showcasing an entertaining dance.

The choreography for these pieces was impressive, as a majority of the dances were dynamic. There were scenes in which the choreography and performers felt a bit disconnected from each other, which was confusing. For example, during one segment in the performance of “Jingle Bells,” the performers were out of sync, and it appeared that they were all doing their own separate dances as opposed to a group piece.

The vocal performances by senior Allison Santogrossi, who sang “How Lovely is Christmas” as Mr. Crachit, and senior Diego Tamayo singing “What Christmas Meant to Me” and “Christmas Dreaming” as Scrooge stood out  for their vocal range and quality.

The writing was of high quality as it kept the idea of the original story while giving it a modern feel and fitting the style of a radio show. The scenes where Scrooge is visited by the three spirits of Christmas were strong due to the voice performances as well as the writing.

The voice acting in the story segments of the performance was immersive, and the actors felt very in-character. Tamayo’s performance as Scrooge and senior Pailey Kao as the radio host were very convincing portrayals.

Overall, the performance was entertaining, both due to the actors themselves and the fact that it was pre-recorded, minimizing technical issues.