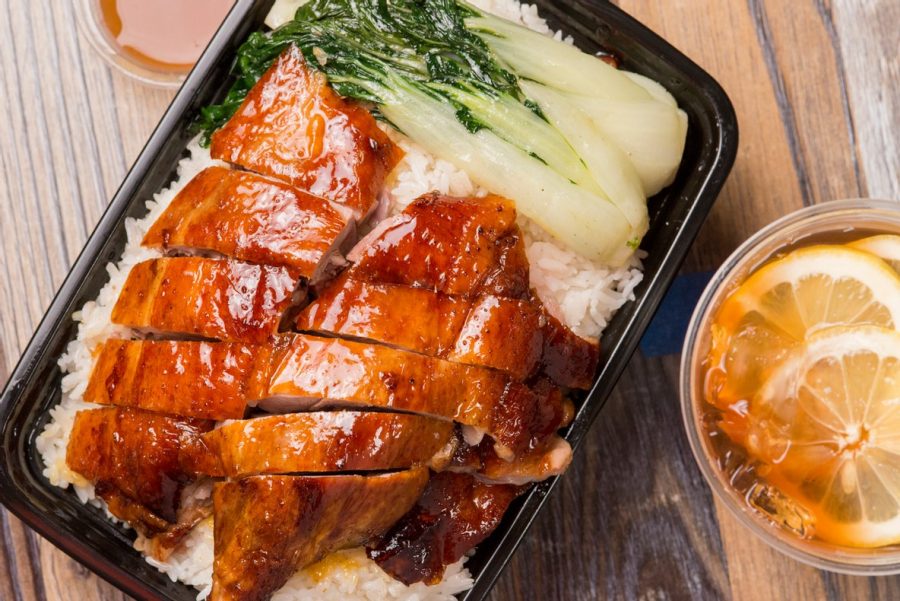 Asian restaurants are not uncommon throughout the Diamond Bar area, so when I stepped foot into Tasty Box BBQ, a Hong Kong barbeque establishment, I wasn’t anticipating it to be anything special. At the end of my meal, however, I found my prediction to be incorrect.

Due to COVID-19, the restaurant, located in the H Mart plaza, is only accepting takeout orders, with no dine-in option. When I entered the establishment, I was greeted by a makeshift ordering station at the front with plexiglass between myself and the cashier. Behind the ordering station, I could see the cooks wearing masks along with disposable gloves. Social distancing was enforced with stickers on the ground that indicated where to stand in line.

The sliced duck was hit or miss, some pieces were flavorful, others were bland. Each bite was either a mouthful of tender meat, or sharp, jagged bones. It came with a side of rice, which had a pleasant, slightly nutty flavor. It also included fresh bok choy. The stalks were watery and juicy, and the leaves were faintly bitter, which went well with the duck. The latter also added a nice crunch to the meal.

The wonton noodle soup came with two round containers: one for the soup and noodles, and the other for dumplings. The wontons were savory and weren’t overshadowed by the slight fishiness of the shrimp. It had an adequate ratio of pork fat to shrimp. The soup was full of flavor but was not too overwhelming, which complimented the plain, springy noodles.

The drinks, as for most beverages in restaurants these days, were slightly overpriced, but worth it for the taste. The HK milk tea was watered down from the ice, and slightly affected its bittersweet taste. It was below average, so I wouldn’t purchase it again. The HK lemon tea was a burst of flavor to contrast the occasional bland pieces of duck, and its sweet and sour taste had me longing for another sip.

The mango pudding was the highlight of my meal. It was served in a surprisingly large container and came with a condiment container of reduced-fat milk. The milk had a thick consistency and was slightly bitter, though it added a nice contrast in taste from the gelatin. The gelatin was smooth and soft, with cut up pieces of mango spread throughout the container. The bits of mango were overripe, but adding in the milk created a nice balance of sweet and bitter.

Despite my initial impression, Tasty Box BBQ is a distinctive Asian restaurant that I may visit again soon.