Unsettling film tells the origin story of the madman joker 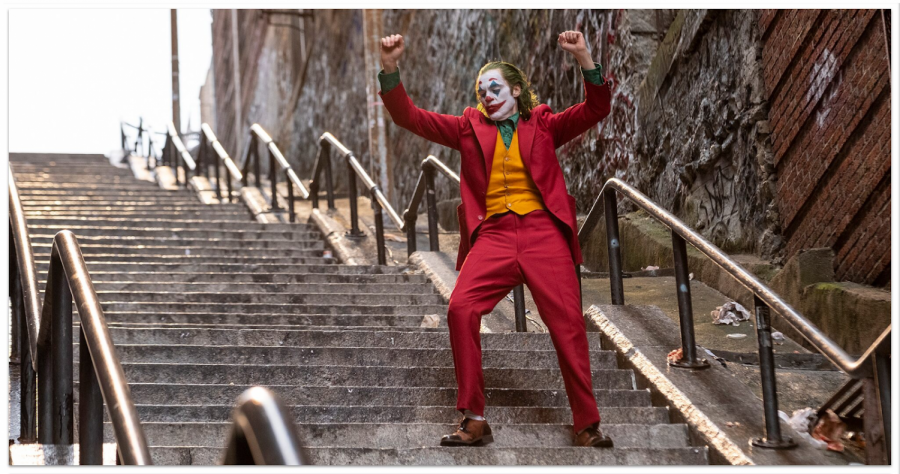 Attempting to repaint the killer clown of many childhoods, “Joker” is a dark film that tells the story of a villain in all of its gruesomeness and terror.

The film details the origins of Joker, who becomes Batman’s nemesis. Instead of plummeting into a vat full of chemicals and turning into the infamous villain as depicted in the comics, Todd Phillip’s version of the Joker falls into a slow descent of madness and despair because of his miserable life.

Due to a mental illness that causes him to laugh uncontrollably under any circumstance, Arthur Fleck (who later turns into Joker), is misunderstood in everything he does and everywhere he goes, despite his attempts to assimilate.

Fleck’s dreams of making it big as a stand-up comedian are seemingly implausible, though his current job is as a clown. Constantly battered by society, Fleck is pushed toward a life of crime as his mental state becomes ever more unstable, eventually leading him to become the Joker we are all familiar with.

This Joker shares similarities to the character in the Batman movie “The Dark Knight.”  Heath Ledger’s version is already established as a criminal and wreaks havoc on Gotham.

In “Joker,” while there is still a small sense of hope and innocence in Fleck in the beginning, as the movie progresses we begin to see the evils emerge from inside  him. The resemblance between the two Jokers is evident in their shared craziness and murderous intentions.

Though the two films are vastly different in that one is a sequel and the other is a prequel, I felt that Joker in “The Dark Knight” was better in terms of overall production and role in the storyline. Even so, “Joker” is still an extraordinary film.

There are no happy endings here. Everything is a slow spiral into chaos and destruction.

The acting in this movie is phenomenal. Joaquin Phoenix does an amazing job as Joker in the film, creating a sense of compassion for his character. From his spine chilling laughs to impromptu dancing rituals, there is no doubt that he truly embodies the Joker.

I couldn’t help but feel pity for Fleck during his stand-up skits or interactions with others.

In addition to the sinister scenes, the movie does a great job of building up tension and foreshadowing unfortunate events with help of the soundtrack. The violin and drums create an ominous tone, warning viewers of the actions to follow.

I was aware of the film’s dark themes before I watched it, but I was not prepared for how unsettling the movie would be, with its dismal situations and ugly violence.

However, it is the film’s ability to disturb viewers that makes it so great. Despite all this, the movie is still captivating in all of its horror and glory.