Tarnishing the image of K-pop 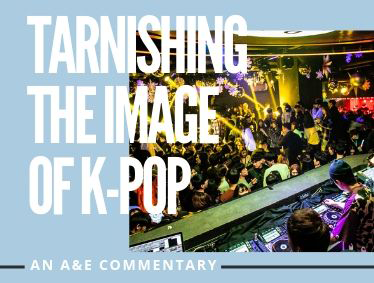 The entire nation of South Korea was taken aback the morning of Feb. 2, when the Korean tabloid magazine, Dispatch, released screenshots of a group chat including idol Kim Seungri, discussing date rape.

The youngest member of one of the most successful boy bands in history, Seungri was a member of the K-pop group Big Bang (formed under YG Entertainment). After a few years with the team, which won the title of Korea’s “National Boy Band,” Seungri branched out and started his own businesses. The idol became the CEO for two companies: Aori Ramen and Burning Sun night club, which is at the crux of the scandal.

The accusations against him for sexual crimes and drug abuse began when Sangkyo reported seeing a woman being assaulted at Seungri’s night club. After rushing over to help the female, instead of being rewarded for stopping the assault, he was physically attacked by two bouncers. When the police finally arrived, the night club framed him as the sexual assailant, leading to his unfair arrest.

Sangkyo appeared on television with a statement, and announced that he was being accused of crimes he did not commit. The public turned their back on the police, believing they were being bribed to cover up the issue for Seungri.

But further investigation into the incident turned the case around a full 360 degrees, as the case resurfaced with shocking evidence of Seungri’s involvement in sex bribery. Screenshots from a Korean messaging app, Kakao Talk, released by insiders from the Burning Sun, showed Seungri offering prostitutes to a multitude of foreign investors for his many companies. Most of the women being “offered” were under the influence of date rape drugs or were extremely drunk.

The idol eventually turned himself into the police for investigation, in an attempt to “prove his innocence,” but suspicions rose to a higher degree after footage of a shredding company, organizations that shred documents and computer files, at YG Entertainment was released. To top off the list of crimes Seungri had already committed, he was then charged with gambling, illegal drug abuse, tax evasion frauds and illegal distribution of spy cam footage.

The scandal only intensified when a few other popular idols including soloist Jung Joonyoung, Hong Jonghyun from CNBlue, and Choi Jonghoon from FT Island were also discovered to be members of the groupchat.

The involvement of other beloved singers caused the nation to take a step back and reconsider their views on the entertainment industry. Based on the fake, cheerful images that K-pop idols illicit when they are on television, nobody would have ever guessed that such a horrid crime could be committed by these same men.

With the large amount of negative attention, the public forced the Seungri to publicly announce his retirement from Big Bang and the entertainment industry. After the predicament unfolded.

The controversy has resulted in many fans reevaluating the fairness of the K-pop system. In such a competitive industry, idols either receive everything from fame to fortune to cultural privilege, or they get the short end of the stick and train for tens of years without earning a single penny or even debuting. The realization that a corrupt man such as Seungri made it to the top of the industry just led fans to wonder whether this dishonest mentality is what is needed to become successful.

South Korea’s reputation also took a major hit after the scandal. As a $5 billion industry, Korean pop not only encourages tourism for the country, but it also promotes the sales of the nation’s consumer products, such as skincare and cosmetics. Stocks for merchandise and these products have all gone down since the scandal.

For a country that has built up much of its global presence through its music and entertainment industry, Seungri’s mishaps have exposed the nation’s toxic masculinity culture that is still very prevalent. Although there was a strong #metoo movement that started in the nation last year, the rallying cries of protest have been ignored by many men.

Yet, the idol industry of South Korea has responded to Seungri’s scandal by taking a deeper look into their celebrities’ backgrounds, even exposing many trainees for illegal activities, such as drug use, before their debut.

The issue leaves fans wondering whether this controversy is just an individual scandal, or if the web of lies connects itself to other idols and entertainment companies.