A small group of Brahmas will attend prestigious schools in and out of state. 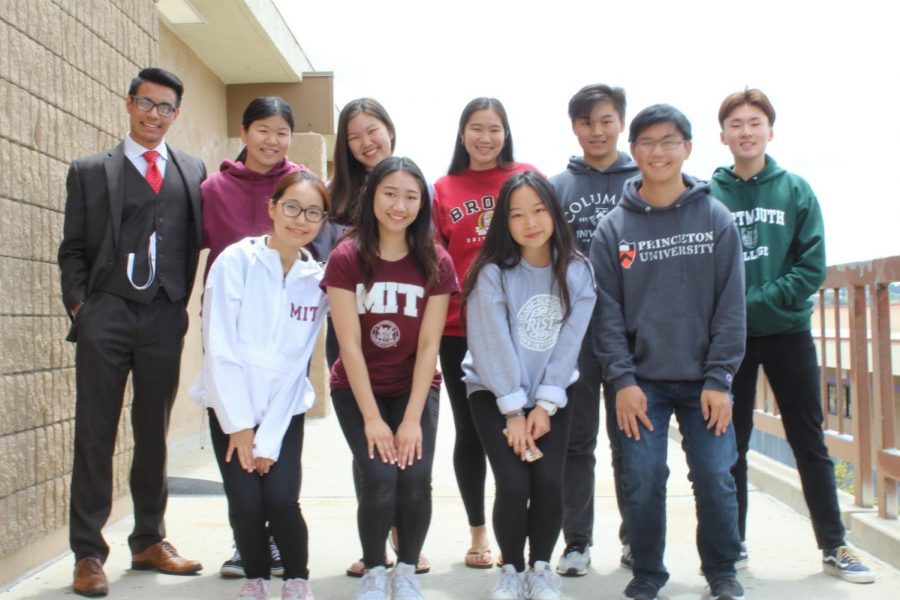 Among the high-achieving crowd of purple and gold, a handful of Brahmas will venture away from Diamond Bar to pursue a degree at some of the nation’s top colleges.

A few Brahmas have found a new home at Ivy League schools: Andrew Chang to Columbia (and Julliard), Darren Chiu to Princeton, Samantha Hong and Christine Zhou to Brown, Austin Hyun to Dartmouth and Arron Ku to Yale.

Heading off to Providence, Rhode Island, Zhou has yet to decide on a major to pursue at Brown, though her original goal was medical school. Zhou’s top choice was Brown because of the school’s close proximity to the Rhode Island School of Design, which gives her the opportunity to pursue her interest in art.

“They have a really strong art program, so I’m hoping to go to Brown and have a challenging enough education, while also taking art courses at RISD,” Zhou said.

At Diamond Bar High School, Zhou was involved in numerous activities including robotics, badminton and marching band. She served as the president of Red Cross, Planet Arboretum and Alzheimer’s Association clubs on campus. Aside from these, she also entered science and art competitions, like the annual U.S. Congressional Art Competition in which she won first place and Fan Favorite.

While other students must choose one college to spend four years at, Chang will travel to New York City to participate in a dual degree program for a bachelor’s degree at Columbia University and a master of music at the Juilliard School. Like Zhou, he is uncertain of which subject to major in, but Chang said that he is planning on taking the pre-medical route.

“I’d be able to continue playing music at a conservatory and study at Columbia so it works out,” Chang said.

Chang, who has seven years of experience playing the clarinet, spent most of his time in high school participating in music-related activities, including the Colburn Youth Orchestra, the DBHS orchestra and band and a competition hosted by the National YoungArts Foundation.

“I was pretty excited [when I got my acceptance] because I knew I wanted to study something and music as well, so that was kind of the perfect program for me,” Chang said. “I don’t really have an established goal, [but] I’m just going to see and experience things and see what I want to do, kind of find what I want to do later.”

“I think the future of education is bipartite: it’s the Constitution and computer science. So I think a mixture of both of those at my future college would be optimal,” Daud said.

Daud was involved in many activities on campus, including TEDx Diamond Bar as the lead curator, Mock Trial as a pretrial attorney and witness and Debate Club and We the People Club as president. He also helped organize the District of Choice rally in 2016 and the national school walk out for DBHS last year. Daud said that his applications showed more of his personality than the activities he participated in during high school.

Wang said that she committed to Stanford despite the fact that it didn’t offer her first choice major, biochemistry, because it awarded her the most financial aid and it was closer to home than some of the other schools she was accepted to. At DBHS, Wang participated in marching band, Inkwell, Science Olympiad, NHS, CSF and USA Biology Olympiad.

“I was really surprised because…Stanford’s acceptance letter came out three days before my anticipated date, so i wasn’t mentally prepared. Because it’s such a prestigious school, I had no expectations whatsoever,” Wang said. “I honestly thought I was going to be rejected, but I clicked on it and it said I was accepted, and I was really happy.”

At Princeton, Chiu is planning on majoring in electrical engineering and computer science and minoring in music. During his time at high school, Chiu joined multiple extracurricular activities involving music, such as playing in the National Youth Orchestra and the National Association for Music Education All-National Honor Ensembles as the principal oboe.

“I really want to start branching out and having a lot of relationships with people…I know people there are really successful, and that’ll probably help me in the long run in like getting a job,” Chiu said.