Taking a bow around the world 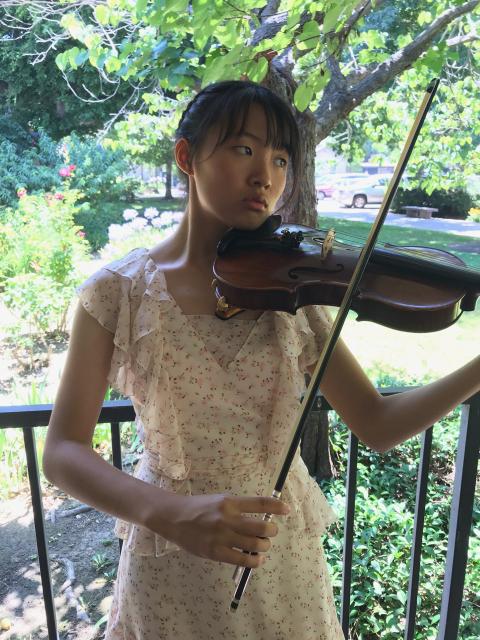 When Diamond Bar High School freshman Kaitlin Chow first started playing the violin, she never would have imagined her hatred for the instrument would evolve into a passion that would take her across the world and to the White House.

When Chow was just seven years old, her mother enrolled her  in violin classes because her cousin also played the instrument. However, Chow  disliked playing at first.

“I would throw a fit whenever I was told to play,” Chow said.

Despite this, she eventually developed a love for the instrument due to her family members. According to Chow, because of the constant encouragement from her mother and  her admiration for her cousin’s violin performances, she continued to play.

“My favorite performance I ever saw was my cousin’s orchestra Halloween performance, the effects and his playing really had me in awe,” Chow said.

In 2012,  Chow became a member of the Classical European Music Academy Orchestra, a youth orchestra based in Los Angeles. As  the current concertmaster of the ensemble, the 14-year-old has been on three foreign  tours, to Italy, Iceland and one to three Europe cities. The first tour Chow ever did was in 2014, when her orchestra toured Italy. Four years later, she ventured to Iceland and performed at the Harpa Concert Hall in April. Her most recent experience was this summer, during a tour of Europe that included performances  in Budapest, Vienna and Prague.

“My favorite performance ever is during the European concert tour, which is when I performed a solo piece in our last performance in Prague. It was really special because I could  really feel that I was up there,” Chow said.

With the orchestra, Chow has given two performances at  the White House and at famed music hall concerts such as Carnegie Hall in New York City.

“We were invited to the White House twice; both times we were placed in the entertainment room where we would play for the tourists who would pass by and watch,” Chow said.

At Carnegie Hall, Chow and the  orchestra were invited to be a guest performance with  other famed performers. Chow has also involved herself with the orchestra programs provided at her schools. While she was a student in Chaparral Middle school, she partook in the ensemble all three years and is currently in the Diamond Bar High School Concert Orchestra.

Even so, Chow remains humble, saying that  she is not even one of the top violinists in her grade.

“You don’t really don’t have to be the best,” Chow said. “I’m definitely not the best person considering this whole school. I’m not the top three, or one of the top people, but because of the work I put in and the people I’ve met and connections I’ve made, I’ve been able to do all these amazing things.”

Chow said she believes that the violin is an instrument that is all about how one applies themselves, that the amount of work put in is more important than how long one plays an instrument for.