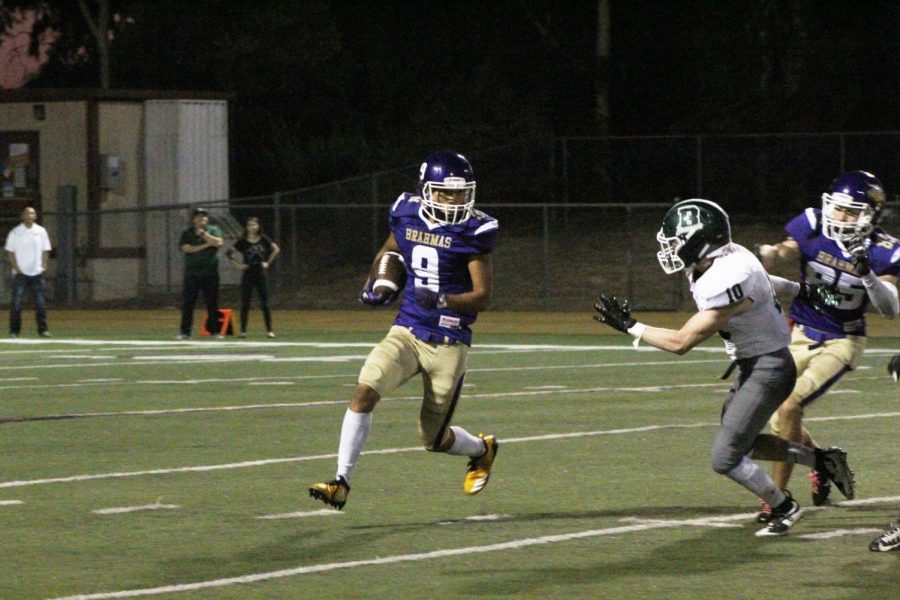 After having come close to the CIF playoffs last year, the Diamond Bar High School football team is ready for more success in the Mt. Baldy League.

Strength issues on both the offensive and defensive lines was a profound factor in falling short of CIF last season.

“This year that ain’t going to happen,” head coach Jeff Reitz said. “We are way stronger than we were last year.”

Although the Brahmas lost some key offensive players on the team, notably running back Jeremiah Chukwudobe and wideouts Kai Smith and Brian Lee, the coach is pleased with their  replacements.

“We have [junior] Jacoah Chennault, [senior] Brian Nithalangsy and [junior] Chase Wells back; they are incredible,” Reitz said. “And now with the addition of [junior] Blake Davis, he gives us that extra big play and allows for greater attraction on the field.”

Moreover, senior quarterback Dylan Karanickolas is entering his third and final season as the starting quarterback for Diamond Bar, and he will be an important factor that determines the team’s success. Last year, he led the Mt. Baldy League in every passing statistic, including throwing for 21 touchdowns.

On the other side of the ball, senior linebacker Leo Carreon and junior Jojo Alarcon  represent the heart of the defense.

Though Diamond Bar must get through it’s Mt. Baldy League opponents,  the team has bigger goals for the season.

“[Our] goal is to get to the playoffs and win that [CIF] first round,” Reitz said. “But between now and then, we have nine opponents we have to prepare for individually every week; we have to get after it, we have to grow up and focus on the task at hand.”

This will be the second year under Reitz’s system, and, according to Reitz, the team is more cohesive as a unit both on and off the field.

“But sometimes, I bend to their personalities and talents and allow them to do the things that they can do,” Reitz said. “We work hard together, and we have fun together.”

During the Branding Iron game, the Brahmas demonstrated the true colors of their development. Both the offensive and defensive lines did their job in protecting Karanickolas and providing effective pressure on the opponents, while the wide receivers showcased their creative athleticism in getting to the end zone. They easily defeated rival Walnut, 34-14.

However, Diamond Bar is struggling mightily against their pre-league opponents so far, suffering double-digit blowouts in their first two matches.

Against the Claremont Wolfpack, the Brahma defensive line was the major flaw throughout the match. While Diamond Bar’s offense alleviated the loss by scoring two touchdowns despite heavy pressure, the inability of the defense to stop Claremont’s run game spoiled the Brahmas chances, losing 48-14.

More of the same play was on display against the elite Bonita Bearcats. The quarterback, under immense pressure from blitzes, made difficult decisions that resulted in incompletions or interceptions, while the defense remained helpless in preventing the solid blocking of Bonita. The team suffered one of the worst losses in school history, falling 52-0 in the year’s first home game.

While there are always skill sets to improve on, Reitz said he believes the Brahmas have a solid team that is definitely capable of reaching new milestones.

“I don’t think we have a weakness,” Reitz said. “If our offensive line pushes people, it’s going to be hard to stop us, and we’re going to be pretty darn good.”