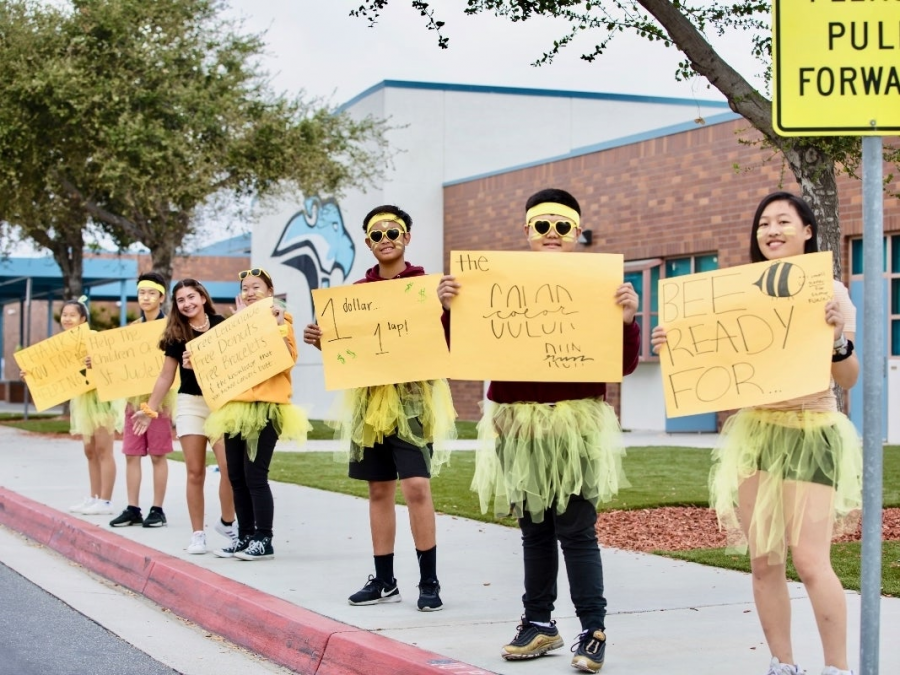 The club has raised around $7,000 to donate to St. Jude Children’s Research Hospital since its establishment.

“Our mission is to brighten the lives of pediatric cancer patients and also raise pediatric cancer awareness because people who don’t step into the hospital don’t know about what patients have to go through,” Yang said.

Her brother, Bryson Yang, was diagnosed with leukemia when Breanna was a freshman, and he passed away this January.

“My brother was a sixth grader at South Pointe when he was diagnosed, so now he would be in eighth grade if he was still here,” Yang said. “He was just this really nice, kind and funny person, but he was also someone who really liked to learn, and he was really into math and facts and history.”

One of the most well known events Yang helped organize was the Color Run at South Pointe Middle School.  The event took place in September, which was also Childhood Cancer Awareness Month. At the Color Run, students earned one dollar for each lap they completed, and the event ended up raising over $4,000 toward pediatric cancer research.

“I’m really grateful for them and how they helped us out with that because not only did [the event] spread the news to people around the community, it also honored my brother,” the junior said.

Her efforts were recognized when Los Angeles television station ABC7 covered the Color Run and Yang’s work in raising awareness for pediatric cancer. ABC7 featured the event at South Pointe Middle School and interviewed Yang and her parents on TV.

“It definitely really spread the word because afterward I got a lot of emails [from] people who wanted to help out, like not only here but like in other areas, so that was a really interesting and inspiring thing to see that other people also support the cause,” Yang said.

Members also raised awareness and funds for cancer research from holding book sales throughout the month of September. In October, they brought Halloween desserts and gifts, including candy, small toys and rubber duckies, to the patients at CHOC so they could make their own goody bags.

More recently, Sunshine held a holiday toy drive, which lasted from Nov. 1 to Dec. 8, and club members collected new toys to give to oncology patients.

“The other aspect of our mission is also just to spread awareness and knowledge about this topic because right now there’s very little research funding for cancer,” Yang said. “[Out] of all the cancer research [funding], only like 4% goes to pediatrics, which is a really small amount.”

After high school, she plans to continue raising awareness for pediatric cancer, whether through the Sunshine Club or through a different organization with the same cause and mission.

“I do plan to pursue a career in the medical field, and I’ve kind of been set on this for a while, but I am still unsure about which field,” Yang said. “I’m definitely leaning towards pediatrics and oncology or neurology because that was what I also saw at the hospital when my brother was there, so that definitely interested me.