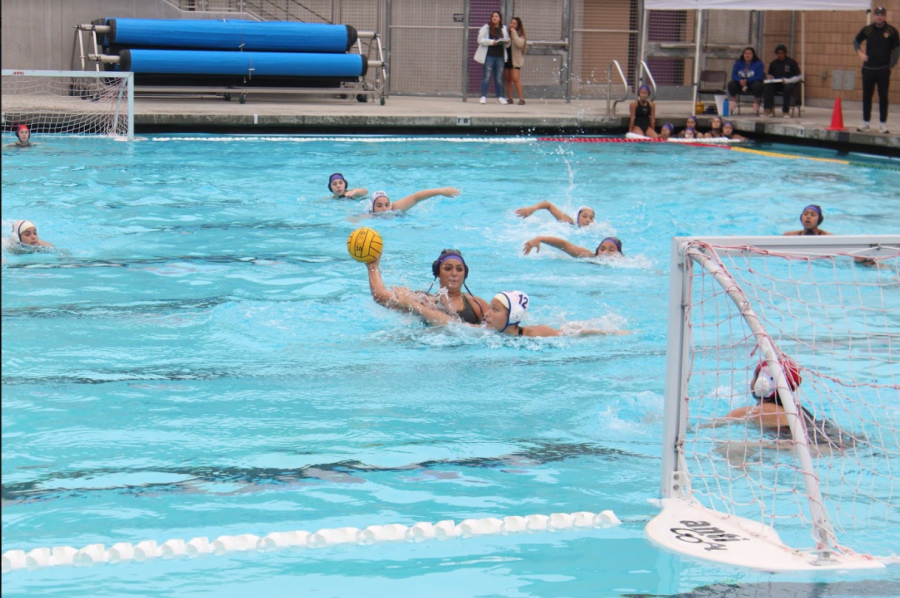 After making it to CIF last season and finishing second in the Mt. Baldy League, Diamond Bar High School’s girls water polo team has high expectations for themselves;  to become CIF champions.

“We really want to make it to CIF again, but we want to get further than we did last year,” junior Victoria Madrigal said. “ I think like a very high goal that we have is to like win CIF.”

The Lady Brahmas suffered an 11-2 loss against La Habra High School in the first round of Division 4 CIF Southern Section playoffs.

So far, the team has played three matches this season, posting a 2-1 record. They won their first preseason game against Ayala High School 15-7. Madrigal, one of the starters on the team, injured her arm while helping her team emerge victorious against the Bulldogs.

“We had a lot of assists, and I scored three points but I ended up injuring myself,” Madrigal said. “I was setting and I went up to shoot the ball, and as I went down my hand ended up hitting the [other] girl’s face.”

Madrigal stated that she’ll be back on the playing roster later on in the season.

More recently, the team experienced a loss against El Dorado High School but faced up against Charter Oak High School and won 18-6.

Senior captain Katelyn Arauz came close to breaking the school’s record of most goals scored during a game.

The record is currently 9 goals and she scored 7, making it apparent that she will most likely break it later in the season. Arauz was also given the Academic All-American award last season.

“We like try to score a lot while trying to keep our defense ready,” Madrigal said. “A lot of the time like we had a lot of good defense, and we were able to counter a lot.”

After losing last year’s core players to graduation, the team has been focusing on their team chemistry. The Lady Brahmas showed sufficient team dynamic in both their wins when they asserted strong defense throughout the entire games against the Bulldogs and Chargers, keeping them from scoring double-digit points.

A majority of the players on the team are juniors, including Madrigal, Ariana Moran and Phoebe Chu. Arauz, who has been on varsity for three years, is working  on keeping the bond of the team close, Chu said.

It was also mentioned that a new captain is planning on being added to assist Arauz this season under head coach Devin Hunter.

“She [Arauz] has been on varsity for a long time and has been trying this season to keep the energy up,” Chu said. “She’s a good leader to have on the team.”

Over the summer, the girls practiced their technique and strategy around two hours each day, including morning practice at 5:30 a.m.

Now, the team practices during sixth period and after school for three hours each day. Also, some of the girls participated in club to get game time during various summer  tournaments.

Their first league match will be against last year’s league champion Montclair High School on Jan. 7.