Scoring a deuce for league title

TENNIS Breezing through league games, the boys plan to adjust their lineup in time for CIF. 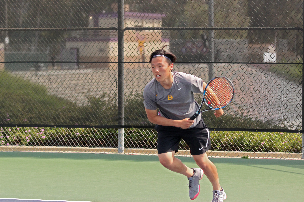 Senior captain Royce Park won his match in the sweep against Chaffey, 18-0.

After remaining undefeated in league, the Diamond Bar High School boys tennis team has its sights set on CIF. With a 10-0 league record, the Brahmas anticipate continuing their winning streak.

Despite their success in league, the Brahmas lost all non-league games except one—their match with Glendora—by a large margin. For league record, the team has won easily, including multiple matches in which the other team hasn’t scored a single point.

“Our tennis team just needs to practice a lot for CIF, especially because we are in a new league that is significantly easier,” senior captain Royce Park said. “We need to practice and make sure to keep our skills at its best.”

Since they purposefully seek out more skilled schools during non-league matches, the team was able to take away certain pointers that were helpful to their future matches. For example, Valencia was a pivotal game for the No. 1 doubles team, consisting of the varsity captains Victor Chai and Park, because they haven’t had any close games.

“Their doubles were very formidable opponents,” Chai said. “One had an amazing serve that Park and I had trouble returning against, and the other had a solid net game where he consistently won the point with a volley. From the game, we learned how to play well under pressure and with a lot of distractions.”

Because league games were significantly easier due to changing leagues, Park said the regular season has not prepared the team for CIF. To continue improving its skills, the team practices by playing against one another and is not planning on changing their game strategies for CIF.

Although the Brahmas have been dominating the courts, they struggled early due to the loss of several seniors. The team had to adjust its lineup, and new varsity players have stepped up to accomodate for the loss.

Players who have stood out this season include doubles team Park and Chai and No. 2 doubles team Nathan Tengbumroong and Abhay Hiriyur and singles player Akilan Arunchalam. All have gone undefeated in league play.

“Every player on the team pulled his weight and contributed in DBHS winning the league championship,” head coach Troy Wong said. “Each team member was exceptional in the way they conducted themselves in the court.”