Preparing for the final lap of the season

After multiple successful meets, the Brahmas look for first place in CIF events. 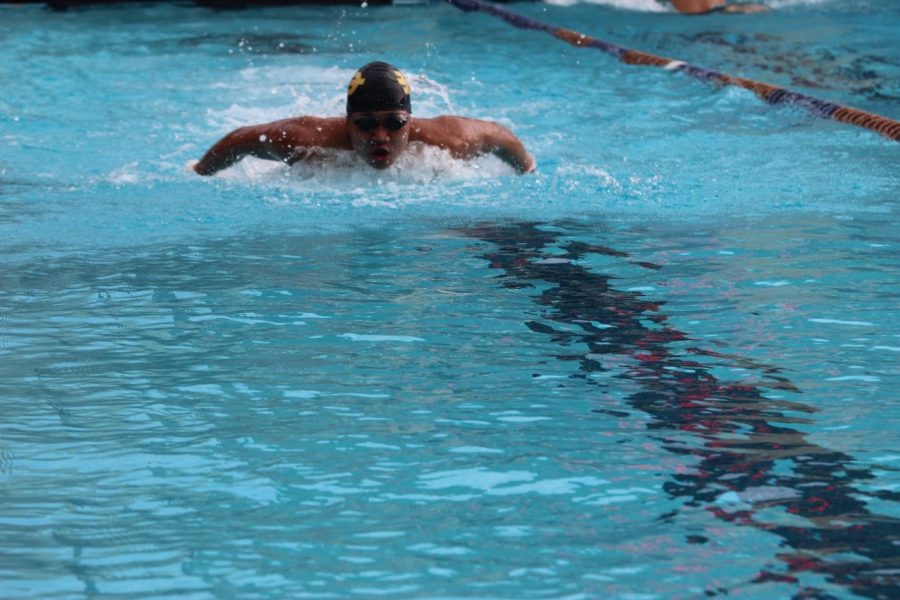 Junior Everett Cheng swam a 59.31in the 100 yard butterfly against Chaffey.

As the regular season comes to a close, the varsity swim team, as the Mt. Baldy League champions, are expecting big things in the CIF playoffs.

“Our teams have been dominating the pool for practically every league meet we’ve had,”  junior Alethea Gani said.

The Brahmas remained unchallenged in league when they won in a home meet against Chaffey High School on April 3, where the boys won 136-34 and the girls won 140-28.

The meet against Ontario, which was cancelled on March 20 due to the weather, was moved to April 4. In the rescheduled meet, the boys won 140-28 while the girls won 137-29.

Diamond Bar gained another win at its away meet against Don Lugo on April 10 with the boys winning 138-26 and the girls, 99-53.

According to Ankeny, the boys have performed well overall in almost every swim event, but one event they have trouble with is the 50-yard freestyle. Ankeny also said that the team has a couple of girls who can swim in any swim event, but the total number of girls on the team is still low.

The swimmers are preparing for league finals and CIF by practicing tapering, which places an emphasis on rest and speed.

“[Tapering is] where you do some fast swims with lots of rest so the lactic acid doesn’t build up in their muscles because rested swimmers swim really fast,” Ankeny said.

Alethea Gani said that the team is also working on dives and kicks, crucial factors to every race.

League prelims were held at Diamond Bar High School on Monday, and league finals will also be at DBHS today.

“We want to win CIF, both boys and the girls,” Ankeny said. “Our boys, we’re trying for champions in every event [for CIF]. So first place in all the events, that’s our goal.”

In addition to the swimmers, there are also two divers on the team, freshman Mackenzie Kim and sophomore Luke Huang, who automatically qualify for CIF.

The CIF diving prelims will take place on April 30 in Riverside, while the CIF swim prelims will be on May 1.