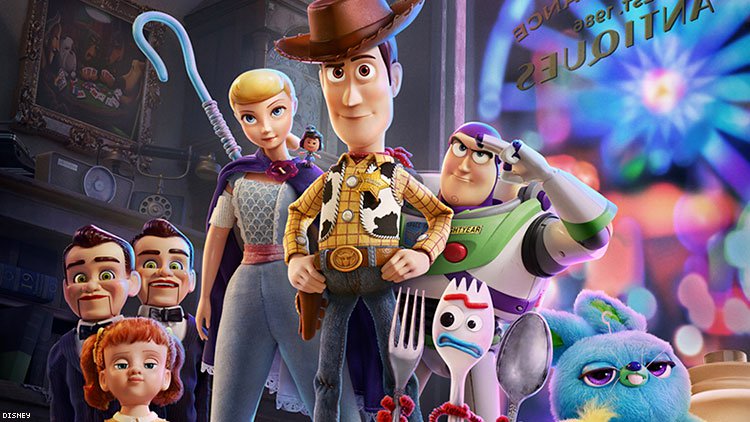 As someone who found the first “Toy Story” creepy, the sequel boring and the third installment mediocre, my expectations for the fourth film weren’t high. “Toy Story 4” doesn’t quite connect with its predecessors, but by the time I finished watching, it stood out as its own likable chapter.

From start to end, the movie is reasonably entertaining. The story’s spotlight returns to  protagonist Woody (voiced by Tom Hanks), a pull-string ragdoll cowboy who leads the other toys in the previous trilogy.  This film focuses first on his dynamic with Forky (Tony Hale): a spork brought to life by Bonnie, the current owner of the toys, when she felt lonely at her first day of kindergarten. As Forky becomes Bonnie’s new favorite toy, Woody becomes his caretaker and helps Forky accept his new status.

Meanwhile, Woody has to contend with the reality that he is no longer the most loved toy. His first child, Andy, went to college and left him to Bonnie, who no longer plays with him. The second half’s focus shifts more to Woody’s reunification with Bo Peep (Annie Potts), a shepherdess porcelain figure who was given away after the second film. Woody learns to accept his new circumstances and develop as a character.

Although  the spork doesn’t fit in with the cast, the screenplay is written well enough where it works – showing  that a child’s attention and imagination is what (sometimes literally) brings a plaything to life.

Pixar is well known for their stunning animation and attention to detail, as seen in movies like “WALL-E” and “Up.” “Toy Story 4” sets the bar even higher. Pixar’s expert use of lighting and colors remains unmatched by most other studios. Some backgrounds and objects appear so realistic that the line between animation and live-action blurs. In several instances, it’s hard to believe that the animators didn’t simply insert characters into a camera-shot video. The renderings even suggest textures that looked like I could almost touch, bringing back memories of rough fabric and worn plastic from childhood toys.

Shortly after Forky’s creation, Bonnie’s family and her toys take a road trip and stay the night next to a carnival. Forky escapes on the way, refusing to be a toy, and Woody jumps out of the RV to find him. Returning to  the carnival, Woody spots the night lamp Bo Peep used to be attached to in an antique shop. There he meets Gabby Gabby, an unloved doll who becomes envious of the loving connections Woody had with his child owners. He also finds Bo Peep who has decided to live out her life as an independent “lost toy,” the very thing Woody is most afraid of becoming.

The narrative is helped by the genuine laughs and action that I’ve come to expect from Pixar. Thankfully, the humor here is more refreshing due to new voice actors such as Jordan Peele and Keegan Michael Key playing the duo Ducky and Bunny. The film also include scary moments as a quartet of mute, zombie-like ventriloquist dolls give some scenes more sinister thrills. With all these elements, the film has appeal for children and older audiences alike.