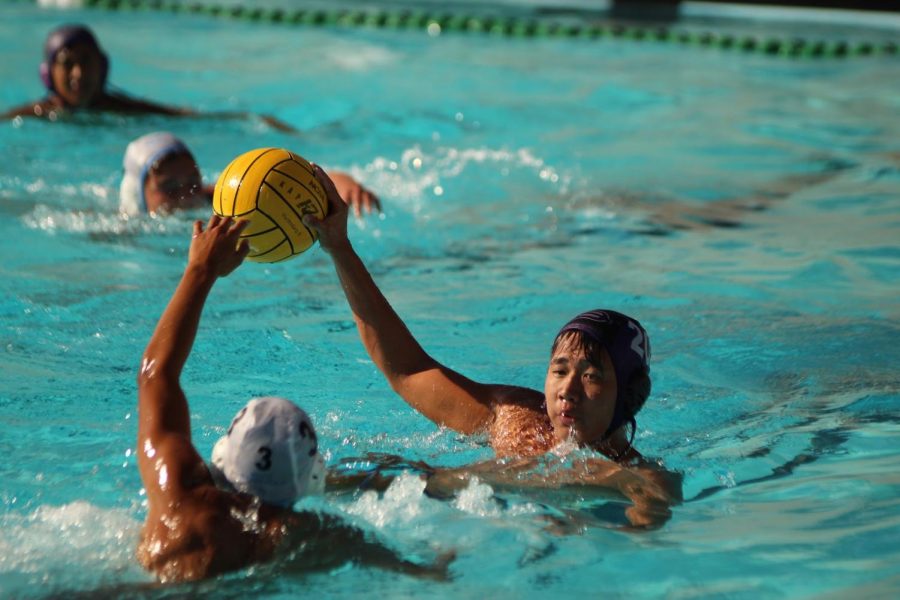 Senior Everett Chang goes for the shot when competing in the win against Ontario High School by a score of 19-7.

Surging through competition with an undefeated record of 8-0 to capture the Mt. Baldy League championship for the second year in a row, the Diamond Bar High School boys water polo team is now headed for the CIF playoffs.

Consistently winning by double-digit margins, the Brahmas dominated the majority of their competition. But in the contest against Don Lugo on Oct. 15, the Brahmas struggled to earn points in the first half.

With two Brahma starters out in the first quarter, both teams fought for  the lead until the Brahmas finally outscored the Conquistadores, who committed a few technical errors, resulting in the Brahmas winning 15-8.

“We expected to win, but honestly we expected to win by more because [they] were a really easy team and we wanted to show our dominance in the league,” senior captain Daniel Stahly said.

Prevailing in the remaining games of their season, the Brahmas defeated their competition in the home game against Chino on Oct. 21, winning 25-5 and claimed a similar lead against the Ontario Jaguars 28-7 on Oct. 23.

Last Monday, the team once again exhibited superiority in a blowout game against Chaffey, utilizing fast-paced offense to their advantage. The Tigers were unable to match in speed and agility, ultimately resulting in the Brahmas triumphing 20-5.

“Our strength is that we have an overpowering offense that often other teams don’t know what to do with,” Stahly said. “We’re very fast, and we have strong shots.”

In the final, deciding league game against Don Lugo last Wednesday, the Brahmas won by one point to become league champs.

Unaccustomed to Don Lugo’s smaller pool parameters, the team ended the first quarter trailing by two points and both teams consecutively tied during the next two. Senior captain Nicholas King was also fouled out early in the first half, making the game more difficult than the team predicted.

With their chance of becoming league champions in jeopardy, the Brahmas claimed the lead after two successful goal attempts and a game saving blocked shot by junor goalie Nicholas Chebat. They won the title 12-11.

“Even though there were setbacks in the beginning, by the end [of the game], we utilized the smaller size to our advantage and ended up winning our final league game,” Stahly said.

The team is now headed to CIF playoffs, where they played against top Division 4 playoff contender San Juan Hills in the first round.

“I don’t know how far we’ll make it in CIF, but as long as we work hard to improve upon our weaknesses, we have a pretty good shot at being successful,” Stahly said.