SOFTBALL The team takes a first-place spot in league for the first time since the 2011 season. 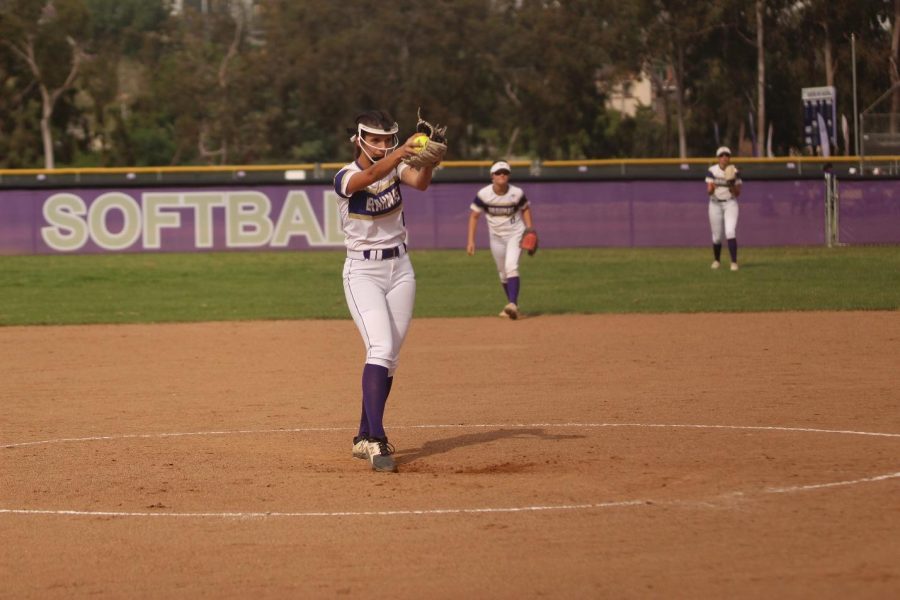 Sophomore Miranda Montes pitches for DBHS in the 5-1 loss to Chino.

The Diamond Bar High School softball team has continued getting better as the season progresses, finding itself  tied for first place in league since 2011.

“It’s a really big change from last year because we have improved so much and it’s a sense of achievement because we practice really hard and put a lot of work in everyday,” junior Liliana Ruvalcaba said.

The girls’ overall record is 13-4. In their most recent game against Chino the girls suffered a loss against the Huskies, losing 5-1.

“I think our main struggle we had in our game against Chino was that we were weren’t producing enough hits and not being smart at the plate,” junior captain Emily Ruhl said.

Previous to the game against Chino, the girls were on a three-game win streak, defeating Ontario twice and Sunset. They previously had a seven game win streak that was ended  by a tough 10-0 loss to Ayala.

So far, two girls have dealt with major injuries this season. Junior Alexandra Tejeda, one of the team’s captains, suffered a hypertension of her knee tearing her ACL and will not return this season. Sophomore Kailee Skidgel also will be out for the entire season after discovering tendinitis in her shoulder.

“We’re doing just fine, we know that the sign of a good team is to be able to rally around people when they have injuries and so far, we’ve been able to do that. Girls that were not getting the opportunity are now getting an opportunity and they’re doing a great job filling in,” head coach Kurt Davies said.

Despite these injuries, the team remains in the fight to win the Mt. Baldy League.

“We have to focus on one game at a time and keep our end goal in mind,” Ruhl said.

The team’s next game will be tomorrow against Montclair at home.