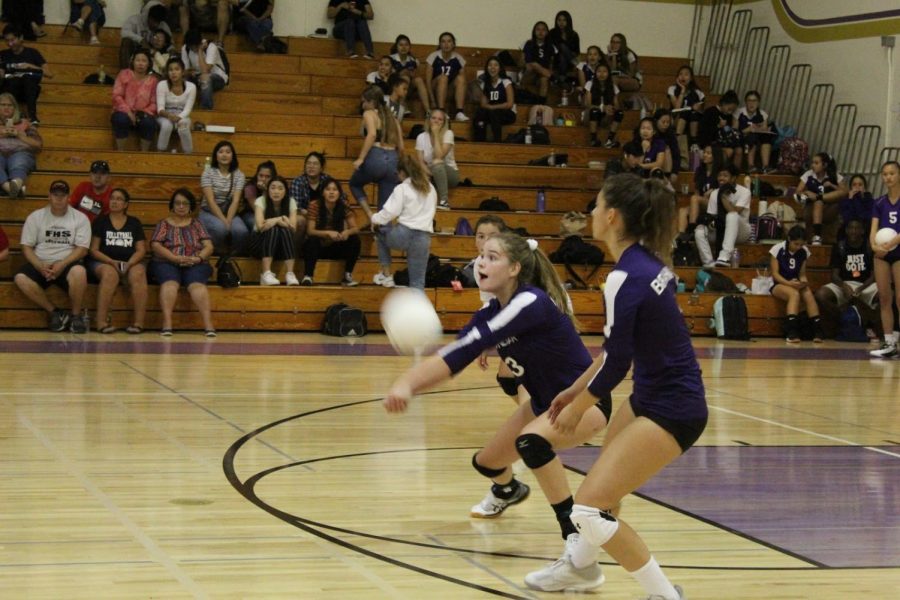 After qualifying for the second round of CIF and finishing with a 9-1 record in the  Mt. Baldy League last year, the Diamond Bar High School girls volleyball team has set high expectations for this season, despite the loss of last year’s seniors.

The team consists of a majority of last year’s junior varsity team and the lone returning varsity player, senior Faith Vasquez Since many of the players previously played at the JV level, where they played best out of three rounds, they still lack  the endurance to play best of five rounds at the varsity level, Vasquez said.

“It seemed like they really wanted the game to be over by the third set, because they’re not used to playing that many rounds,” Vasquez said after the Brahmas’ 3-0 preseason loss against Walnut.

To help the team succeed,  Vasquez is also trying to improve her skills even as  she is receiving  offers from various colleges to play beach volleyball.

“I think I need to come out of my shell more [and] I need to be more vocal, because I usually just let other people take charge,” Vasquez said. “So I’m being pushed to actually say more things to the players to help pick them up.”

Along with the lack of upperclassmen, the team also had to adjust to having new varsity captains Vasquez and junior Kailee Skidgel. The team hopes that having the new captains will help reduce the tension among teammates on the court.

“Everybody’s going out there and trying to be like a superstar so that they can get their name announced and get attention,” Vasquez said. “We’re trying to learn to sacrifice our own personal glory for another person to get the ball.”

Along with their loss against Walnut, the Brahmas also lost to Bonita, 3-0, and South Hills, 2-0. This came as a surprise to the team after they practiced five times a week during the summer under new head coach Lauren Adnoff, who lead junior varsity last season. The games showed them the importance of defense.

“We’re really trying to focus in on our defense so we can start working on our skills like hitting,” sophomore libero Sidney Humphry said. “We’re just really trying to play together and not play for ourselves; we want to play as a team.”

The team’s first league game will be against Montclair today. The team expected this game  to be a challenge  considering that Montclair was league champs  last season.

“I think our very first initial game might be a little bit rough because they’re going to get to play; Montclair, and they’re one of the more advanced teams in that league,”  Vasquez said. “But after that, I think we’ll have a pretty similar record compared to last year when we were 9-1 in league and advanced in CIF.”