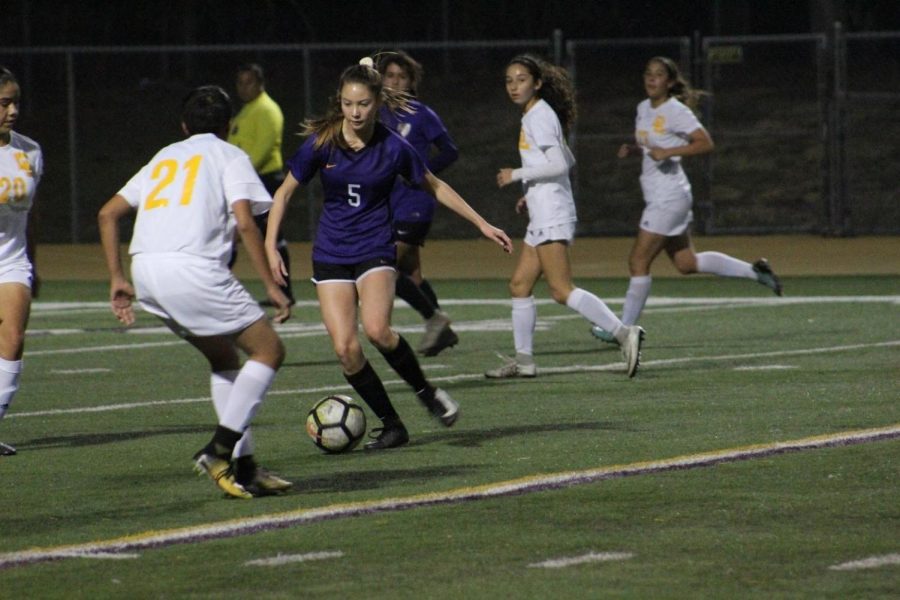 Sophomore Emily Le made a goal in the girl’s blowout game against Don Lugo, 6-1, the highest they’ve scored since 2015.

Diamond Bar High School girls soccer head coach Matt Franco attributes the team’s league success to the preseason matches against Division I and II teams. The Brahmas lead the league with a record of 6-0.

“We are playing a little weaker competition this league so it’s just making sure they are staying consistent and doing what we worked on against the tougher teams,” Franco said.

In the team’s first Mt. Baldy match against Ontario, the Lady Brahmas defeated the Jaguars 2-1. The two goals were scored by sophomore Emily Le and freshmen Isabella Montelongo-Lisak, with an assist by junior Marissa Vasquez.

In their second league match against Chaffey, the Brahmas dominated the Tigers, 4-0. Vasquez scored two goals and both Montelongo-Lisak and sophomore Julia Ruelas scored a goal.

“We pretty much controlled the game for the most part against Chaffey,” Franco said. “We have just been lacking that killer instinct of attacking the ball, and once we started doing it we started getting some goals.”

They continued this winning streak in their fifth match against Montclair, 2-1. Junior Kaitlyn Morales and Vasquez both scored a goal.

The team had another dominating win in their sixth match against the Cowboys, 5-0. Vasquez scored two goals while Valdivia, Beaulieu and Le all scored single shots to bring in the win. The team will be having another league match today in a home game against Ontario.

According to Franco, Midfielder Vasquez has been one of the key players on the field.

“When she’s on the field, the girls tend to look for her a lot,” Franco said. “They feed off of her work ethic and her ability to create, and when she’s playing well, the other girls play well off of her.”

According to senior Jordyn Beaulieu, because the Brahmas have trouble scoring, they have focused their practices around finishing their shots at the goal as well as improving their defensive line.

“If we finish this season anywhere other than first place, it’s not because anyone was better than us, it’s because we didn’t want it enough,” Beaulieu said via Instagram.