Brahmas talked about personal challenges and overcoming them at TEDx. 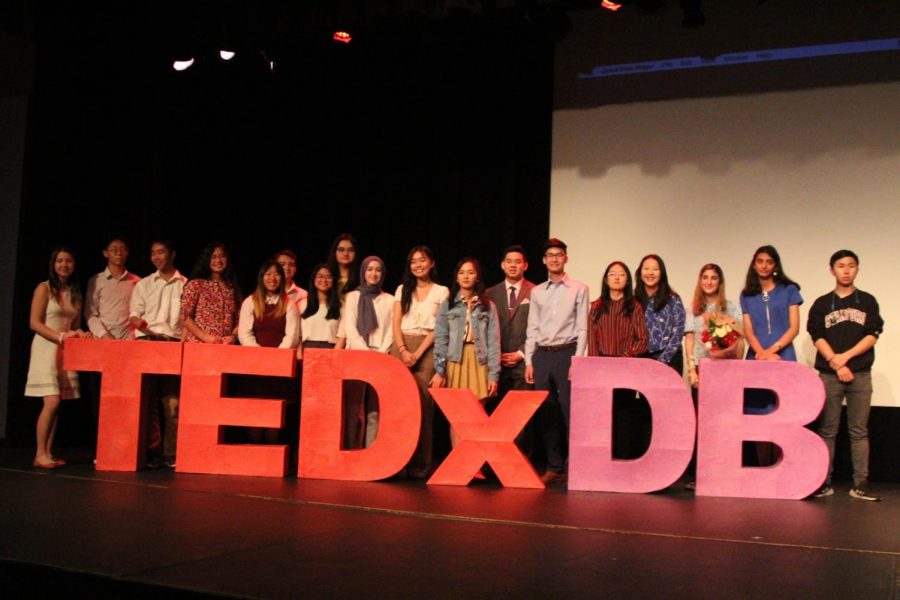 Students of different grades and backgrounds open up about topics such as mental health and social issues on Nov. 13.

Eighteen Diamond Bar High School students spoke on a variety of topics, ranging from cyberbullying to the importance of keeping up with politics, in the third annual TEDx DBHS event, which was hosted by the Wellness Center on Nov. 13.

Junior Kyra Ruiz began the event in first period, talking about how her brothers received more praise in karate than she did, even though Ruiz trained harder, and how upset this made her. She explained that she later learned to follow her own path instead of trying to be in her brothers’ shadows.

Sophomore James Wu spoke next on how often harmless insults are used and how some people can become upset, leading to a decrease in self-confidence and other factors.

Senior Arella Yang closed the first period of presenters by discussing how to look past a person’s race, seeing who a person is on the inside and taking the time to understand each person’s layers.

In second period, junior Ava Kayahara spoke about her struggles with cyberbullying. Opening up about the months of torment that affected her life and how she recovered, she also presented her story through a video that showcased her struggles of cyberbullying through dance.

Senior Brian Lee presented next. Starting off his speech by telling a story about his left lung deflation and how it affected him mentally, he then spoke about how a person can repurpose their stress. He said there are three steps one must follow: identify the problem, ask “Is it worth my stress?” and create and implement an impactful solution.

Junior Anoushka Bhat concluded the period by discussing what true friendship is and that one must learn to appreciate themselves, be self-confident and find a good friend group.

During third period, junior Arthur Zhuang spoke about overcoming his fear of speaking due to his unintentional stuttering. He spoke about how stuttering hindered his social ability greatly and how he used to be so afraid to speak that when waiters would ask for his name, he would just spell it. Zhuang said that he finally wanted to break free from his fear and seek help, and he eventually overcame this obstacle. The message he delivered was to never let your personal struggles consume your life.

Also during third, freshman Hilal Balik shared the stereotypes she has dealt with as a Muslim, specifically when wearing a hijab (a veil covering a woman’s head) and freshman Autumn Miller spoke on “The Weight of Insecurity.”

In fourth period, junior Derek Wang shared his view on why the younger generation should pay close attention to today’s politics. He presented his personal ideas and opinions of American leaders and multiple reasons as to why current students should be more informed.

Also during fourth, sophomore Anna Chen spoke about the microaggressions she heard as a Chinese American. She revealed that she later learned to accept her heritage. In her presentation, she said America is like a salad bowl in that “each element adds harmony while preserving the unique characteristics.” Also speaking was Angel Zeng on boosting self-esteem.

Junior Yifei Hu presented in fifth period about being mediocre and how one should accept that. She talked about how the kids around her seemed to be better at her at everything, including social skills, taking AP classes and having amazing achievements in extracurricular activities; this made her feel as if she was less than them.

In sixth period, senior Samuel Rojas talked about his struggles with child abuse. He showed everyone the long stick that was used to hit him. He touched upon his experiences with abuse and how it has shaped the person he is today. His message was directed to the future parents in the crowd when he noted that a parent’s actions truly affect a child’s life when they grow up.

Freshman Isabella Saeedy also spoke during sixth period about how her nerve removal surgery temporarily disabled her right hand, which completely altered her lifestyle. She discussed how doctors and specialists told her she would never be able to surf again and how she simply could not accept that fate.

However, she didn’t let her right hand take away what she loved the most and connected her story to how others should also not allow obstacles take away what they love to do.

Closing the TEDx Talks was junior Vivian Huang, who discussed the bullying she endured when she first came to America in the fourth grade and how she feared the same thing would happen to her in high school.

Renee Elefante and Grace Lee also contributed to this story.