Brahmas stay in the fast lane

TRACK AND FIELD Although field events lag behind runners, multiple school records are broken in time for CIF. 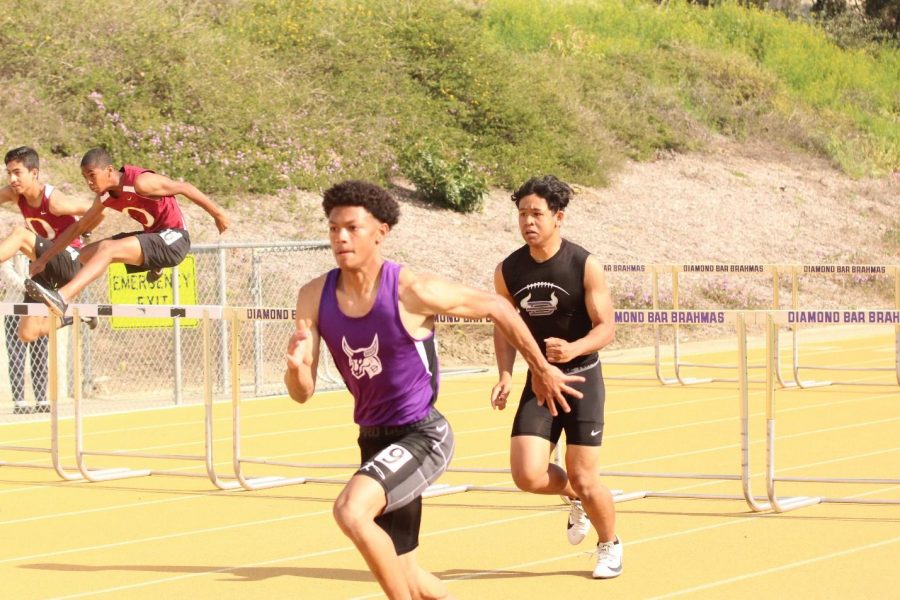 With many athletes striving to qualify for CIF, having won the Mt. Baldy League this season with the strength of the team’s runners, Diamond Bar High School track and field is taking steps toward building a stronger field team.

The boys finished first in league competition while the girls team finished third.

Diamond Bar also did well on the hurdles, with senior Matthew Uballe coming in first on the 110 and 300 for the boys, as well as senior Abigail Nakaishi taking first on the 300.

Although seniors Kailen Smith and Williams took first in their events, the Brahmas did not shine overall in high jump, discus throw or shot put events.

At another home meet again Chaffey on April 9, Diamond Bar dominated with the boys scoring 113-14 and the girls 101-26.

The Brahmas took top spots in almost every event. Amare came in first in the 800, mile and 3200 races for the boys while Nakaishi took the top spot in the 100 and 300 meter hurdles.

Two Diamond Bar records were broken recently, and many top 10 spots on the school records list were taken by members of this year’s track team. Amare broke the school record for the mile with a time of 4:23.04 and is third in the 3200. Uballe also broke a school record, with a time of 14.39 on the 110 meter high hurdles and took the eighth spot on the list for the 300 meter hurdles.

While the Brahmas have been doing well on the track, they have been struggling with field events according to head coach Malinalli Cooke.

“Field has been our weakness this year,” Cooke said. “Unfortunately, we’re now in a building stage in terms of the throwing events. We lost some momentum with high jump because we didn’t have a coach for a while.”

Cooke hopes to remedy these issues and build a stronger team through consistent coaching and additional fundraisers.

“All of the coaches work really well with each other because they knew each other from before, so that cohesion has helped a lot,” Cooke explained. “One of the things we need to get good coaches is money. We had to cut a lot of our coaches this year because we didn’t have the funds.”

On Saturday, seniors, Smith, Uballe, Chukwudobe and Timothy Lee competed in the Mt. SAC Relays at El Camino College. The Brahmas will be moving into the Mt. Baldy finals with top competitors going to CIF.