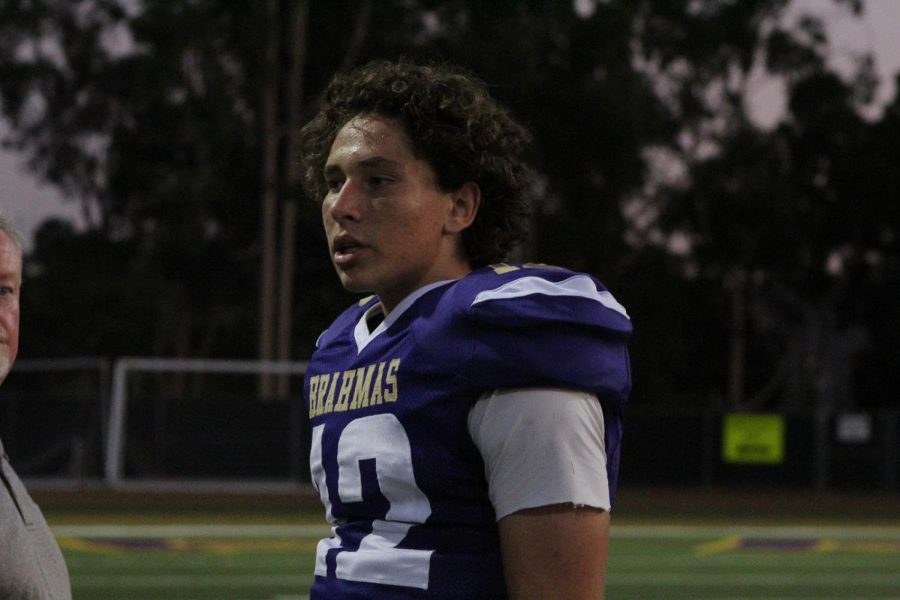 From underdog to star quarterback for the Diamond Bar High School football team, Dylan Karanickolas’ road to success wasn’t always an easy one.

Leading the Brahmas to four regular season  victories last year,  Karanickolas has played a crucial role in guuiding the team over the past three seasons.

He ranked first in the  Mt. Baldy stat leaders, trumping the other quarterback  by a drastic margin. Karanickolas accumulated 2163 yards for  the season, averaging 216.3 yards per game. Additionally, he threw for  21 touchdowns and had a 50.9 percent  passing completion accuracy, tripling that of other players in his league. He started his third year as the starting quarterback with a dominating win in the Branding Iron game.

Originally focusing on soccer, Karanickolas was merely joking around with his father when he was first introduced to the idea of playing football.

“My dad actually was just messing around and said, ‘Hey son, do you want to play football?’ I was seven years old at the time and I was playing soccer, but I was willing to give it a try, which surprised him,” Karanickolas said.

As he started to practice with his father, Karanickolas soon grew to love the sport and spent the summer before freshman year playing in Diamond Ranch High School’s football program. After meeting an older player with similar aspirations of becoming a quarterback during tryouts, he decided to transfer schools to Diamond Bar, as he was unwilling to compromise playing time and realized that there was greater opportunity that awaited him at the new school.

“I was actually going to go to Diamond Ranch, and when I went there during the summer, the head coach brought in a kid that was [quarterback]. I knew he was already going to get most of the reps, so I transferred here and worked my butt off to show Coach [Marcus] Hughes I can make varsity and start my sophomore year,” Karanickolas said.

As the only player to make varsity that year as a freshman, Karanickolas struggled both socially as well as physically.

“My freshman year, I was about five foot five, so I could barely see over the linemen,” Karanickolas said. “It was also hard transferring schools because I didn’t know a lot of people, so I went to football as my outlet.”

Despite his height and size disadvantage, he still managed to persevere and became a starter for the team during his second year. Although he suffered a minor ankle injury and missed two games, he had a quick recovery and earned honorable mention in the league All-Star selections that season.

Now 6 feet 2 inches as a senior, Karanickolas is ranked 513 in California when compared to the statistics of other quarterbacks in the state. As for his performance on the field, Karanickolas’ average of 300 yards and 4 touchdown passes per game are more than double the national average statistics, while his average of 25 completed passes per game exceed the standard by three times.

Since joining the football team, Karanickolas believes the sport has helped him develop crucial skills such as time management and balancing athletics with academics.

“I do train outside of school basically everyday,” Karanickolas said. “I would say I dedicate about a minimum of ten hours a week, not including the practices, weightlifting sessions, and film watching at school. I practice outside [of school] about an hour a day during the week, except on Fridays because that’s game day, and about three hours on Saturday and another three hours on Sunday.”

“I’ve been playing football since I was seven, and I hope to have many more years on the [field],” Karanickolas said. “I’m just going to play until however long the game wants me to play.”

This story original stated that Diamond Bar football team made CIF playoffs last year. They did not.