Although Diamond was out in his second year, he placed seventh at CIF Championships last season. 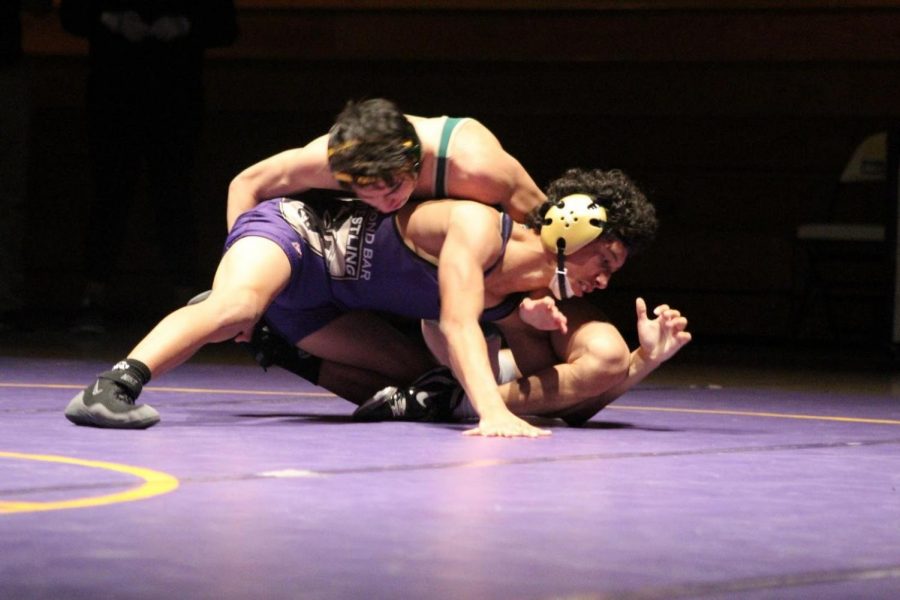 Last season Diamond (bottom), placed sixth at the Carter Tournament and Top 12 at the C Tournament of Champions.

For varsity captain Conner Diamond, wrestling has been a way to learn how to succeed, on and off of the mat. The senior has been part of the wrestling team since his freshman year.

“What has driven me to wrestle is the feeling of success,” Diamond said via Instagram. “It’s like no other feeling, and I like living the lifestyle it has taught me: perseverance, passion and the importance of hard work.”

Diamond attributes his success to his friends, family and coaches helping him in any way possible.

“My parents were the ones who would drive me around to all the places to compete and train,” Diamond said. “And my coaches spent a lot of one on one time with me…My drilling partners are always pushing me and always making me work harder.”

A typical training session for Diamond consists of practicing common moves he uses in matches, speed drills, live wrestling and sprints. After each session, Diamond stays for a couple of minutes to wrestle with alumni who often visit.

“Conner, he is definitely the most hardworking guy in the room,” wrestling coach Andre Bonafe said. “He’s the first one there, he puts in a lot of extra work… Any kind of effort in order to get him to where he needs to be, he puts in that effort, no matter what.”

During his freshman year, Diamond was inspired to join wrestling due to his family. From then on, Diamond began to get a feel for the sport.

However, in his sophomore year, Diamond’s growth was put on hold when he broke his collarbone and was forced to stay on the sidelines for the season.

Coming back from his injury, Diamond dedicated himself to improving his game. Understanding that there was much he missed out on, Diamond took every opportunity to catch up.

“I lifted every day, took any chance I had to wrestle, went to camps for wrestling and most importantly, I would wrestle with people who had a lot of success in the sport,” Diamond said.

Though he doesn’t wrestle for any other teams, he competes as an individual at outside tournaments in the offseason. He has placed in multiple tournaments, including the Carter Classic, Mann Classic and the Ed Spring Holiday Classic.

Wrestling has left its mark on Diamond’s personal life as well.

“Of some sorts and the year before, I had a confidence issue. But since I had trained so hard for so long, my confidence went up,” Diamond said. “Not only did my ability in wrestling go up; I started to notice that my grades started to go up… Working hard like that has benefitted all aspects of my life.”

Diamond said that he looks forward to pursuing wrestling at the collegiate level.

“Right now, I just plan on wrestling at Mt. SAC,” he said. “I know the coaches there and it’s close to home, and I’ll then hopefully find out where I would want to go after that.”