An adjustment to a new style of play

Coming off an undefeated league season and an appearance in the second round of the CIF playoffs, Diamond Bar High School boys basketball is ready to replicate its success and become league champions for the third consecutive year. 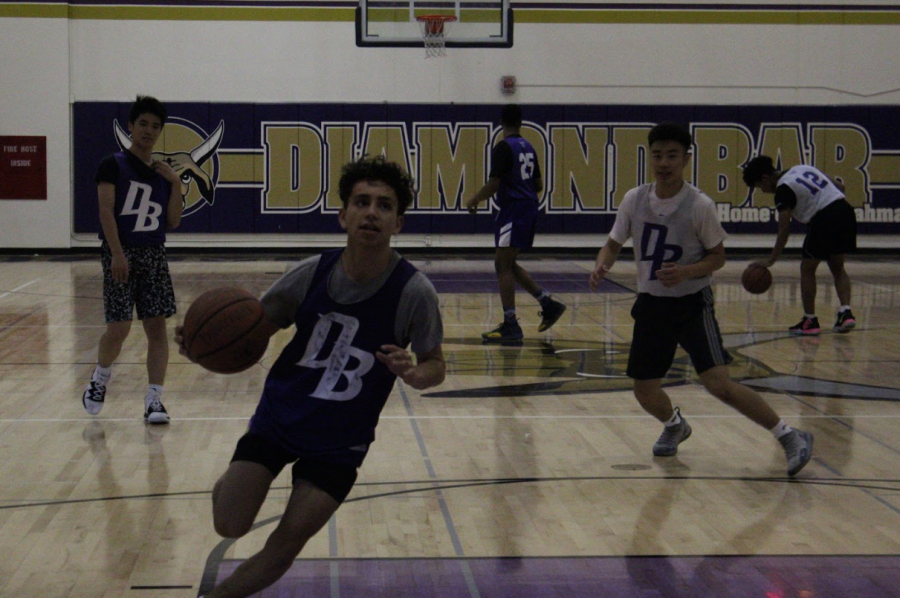 With the graduation of eleven seniors, the Brahmas feature mostly fresh faces who, according to their coach, specialize in elite ball-handling and long-range shooting skills. Although expectations are high, the Brahmas are unfazed and focused on the upcoming season.

“Our number one expectation is to win league, regardless of the number of seniors or youngsters we have or how well we did last year; none of that really matters,” head coach Henry Frierson said. “It’s like starting from the ground up again.”

Although the team is starting from scratch, there already is a sense of unity within the Brahmas. Frierson said he believes that simple adjustments need to be made from a coaching standpoint, in terms of teaching the athletes about the basic systematic fundamentals.

“I’ve been spoiled for the past two years on the terms of exactly where the kids are as far as their development, their knowledge on our system,” Frierson said. “ I just have to take a step back, emphasize all of the fine details, get to know them all at once and just be a bit more patient myself.”

Moreover, the young athletes have a lack of experience in playing Brahma style basketball. Frierson plans to emphasize the necessity of full-court pressure to maximize Diamond Bar’s fastbreak scoring opportunities in the painted-area, where the Brahmas are at their best.

“What the team is lacking the most is not only floor experience, but also the familiarity with us and the system and tempo we like to play at,” Frierson said. “We like to play at a breakneck pace, but some of the kids are uncomfortable only because they’ve played at a different pace from what their previous coaches want[ed].”

The dominant success the Brahmas have had over the past two years is credited to this long-established half-court press system, which causes problems for opposing offenses by forcing turnovers in the opponents’ half of the court. The rapid pace they play at allows for dribble penetration toward the paint, providing multiple layup opportunities close to the basket.

“I always like to say there are a million different ways to skin a cat,” Frierson said. “This is just our way on how we skin it, and so getting them acclimated to the pace that we want to play at is definitely going to be a challenge.”

The relationship between the players and coaches is also another imperative factor that will determine the team’s success. Based on the rapid learning and development the team has already demonstrated, Frierson said he believed that last year’s goals aren’t far-fetched.

“The kids need to be coachable and the coaches need to be flexible; we need to grow and be able to handle some of the changes that are happening within basketball in general,” Frierson said. “We have to adjust to some of the refereeing styles and be flexible to sustain the free-flowing pace of the game. While we [coaches] need to be a bit more flexible, sometimes we have to be as demanding as possible on the details on what we want.”

As long as Diamond Bar controls the pace from the game’s beginning to end while sticking to their defensive principles, Frierson said the Brahmas will show no weakness regardless of the different personnel changes they have on the floor.

“The identity of our team should always be dictated by the defense,” Frierson said. “When someone sees a Diamond Bar team, I want them to think that they’re going to play extremely hard while pressing and defending, while playing fast on the offensive end.”