TRACK The Brahmas reign as league champions, along with individual successes. 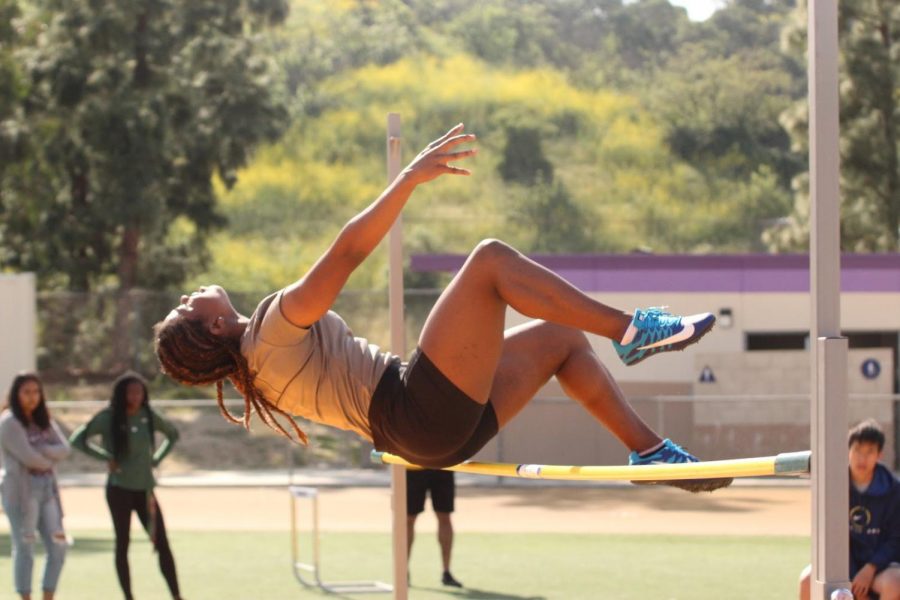 Senior Paula Williams competes in high jump during a meet against Ontario.

After an undefeated regular season, an updated coaching staff and new school records, the Diamond Bar High School track and field team has had a breakout year.

Head coach Malinalli Cooke said she was impressed by the way track performed throughout the year. In their major meets in the Mt. Baldy League, the Brahmas blew out four of the five teams with impressive double-digit margins, while obtaining one of their wins against a tough Ontario hiteam.

“We’re in a slightly easier league than the year before, so that helped,”  Cooke said. “We definitely got more league championships than I expected, which was amazing for the team.”

The success of the team was especially prevalent during its run in league finals at Montclair High School.

On the track, sophomore Jadyn Sanchez dominated not only individually but also on relay teams, obtaining the title of league champion for the 400 meter race, while contributing to the Brahmas’ wins in the 4×100 and 4×400 events.

Outside on the field, sophomore Emily Chen performed astoundingly in the pole vault event, achieving a new personal record and ranking fourth on the all-time DB list.

Despite the conclusion of the main meets, some athletes went past their limits and had the opportunity to thrive in the postseason.

Senior Kai Smith qualified for the CIF finals in high jump and placed second in the competition, punching his ticket to the CIF Masters meet.

During the Masters meet in El Camino college, Smith jumped a 6’4, qualifying him for the next level. He will be competing at state next week on May 25th at Clovis.

Senior Matthew Uballe also had his share in the CIF finals, placing seventh in the 110 meter hurdle event.

The team obtained these victories through more vigorous practice sessions, even elongating the duration of the workouts to make sure that the athletes were ready for competition. Junior hurdler Chris Lee mentioned how the training was more intense compared to last year.

Cooke also complimented the individual responsibilities that some student-athletes had to bear in order for the team to stay on the same page. One athlete she `explicitly mentioned was senior Jeremiah Chukwudobe, who seemed to have a profound influence on the players.

“He [Chukwudobe] was really good at getting the athletes warmed up and ready to go before practice, basically serving the role of team captain,” she said.

In spite of all the achievements that the Brahmas earned during the season, Cooke said that there remains room for  further improvement.

“I am working on getting the athletes more base training, or preseason training, for both our winter and non-winter sports athletes,” she said.  “The time period we have, around six weeks, is not a sufficient amount of time to get them fit for competition, so we need to start earlier.”

While achieving major successes this year, the future looks bright for the DBHS track team. Along with new training staff who are willing to remain in the program, Cooke expressed optimism when describing the potential results for the years to come.

“We have a lot of young athletes that just need another year or two to peak,” she said. “With a lot of our top athletes leaving this year, I don’t know if we will have the same successes next year, but I think the year after will be a good year for us.”