A traditional take on Chinese cuisine 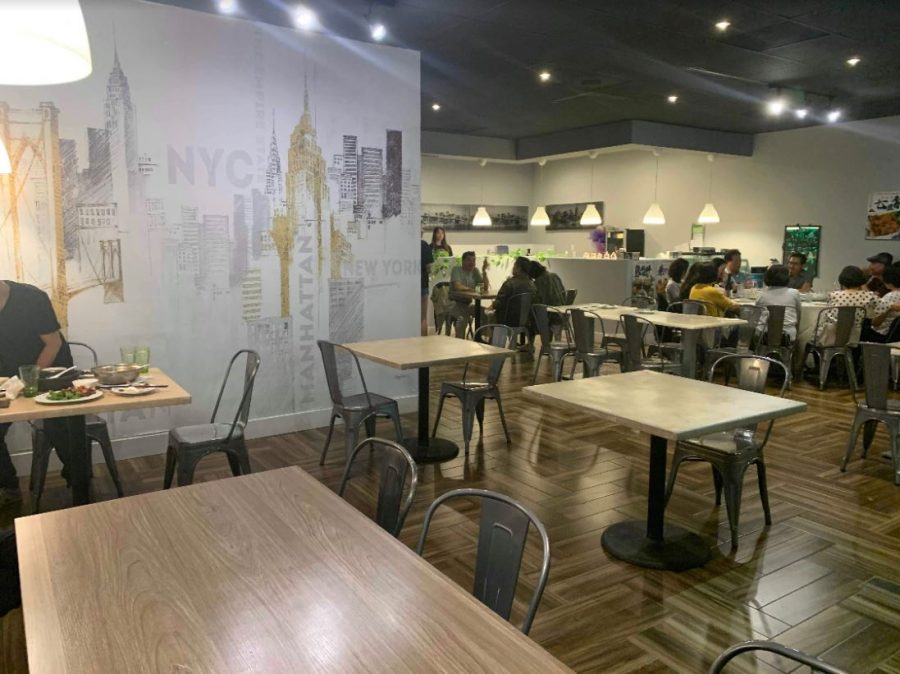 Nestled in the corner adjoining Albertsons, Chun’s Dining, a Chinese restaurant, stands out with baby blue pastel walls and luminous light fixtures contrast greatly with the dark-hued and dimly lit stores surrounding it.

As I walked in, I was greeted with the sounds of Chinese pop music playing in the background and the banter of a table of twelve, the only other customers.

With only a few haphazard sketches of Parisian-themed artwork, a neon sign advertising daily specials, Brooklyn Bridge wallpaper, and tropical foliage strewn around the vicinity, the integration of incohesive and uncomplimentary decor excluded a strange, tasteless vibe more similar to that of a cafe.

As I viewed their menu, it was apparent that Chun’s Dining chiefly reflects off old-fashioned culinary recipes from southwest China, offering predominantly Sichuan style dishes known for their trademark bold flavors and abundance of chili peppers. Written completely in Chinese characters, the menu included no translations, and its English version consisted of less than half the dishes exhibited on the original, all of which were heavily Americanized influenced versions.

The soup dumplings as well as the dan dan noodles arrived within ten minutes. Consisting of eight average sized portions in a classic metal steamer, the soup dumplings were subpar in both its texture and flavor. The filling was identical to that of any average dumpling and the thick outer dough was oversteamed, producing an unfavorable limp, sticky consistency.

On the other hand, the dan dan noodles exceeded my expectations. Despite its overcooked noodles and overly salty meat sauce, the sweet overtone of the sesame sauce complimented the subtle undertones of the braised meat, with just the right amount of peppercorn oil added to create a perfect balance in flavors.

Next were the braised beef noodle soup and three delight seafood noodle soup, both of which were adequate. The braised beef noodle soup came in a decently sized pot, where it was garnished with cilantro and pickled vegetables. With a deep layer of chili oil floating atop the soup, I didn’t find the dish too appealing due to the overpowering spiciness from the oil, which rendered me unable to taste the base flavors of the soup.

Despite the overwhelm of spice, the beef itself burst with flavor and the juicy tenderness of the meat paired with the al dante noodles created an exquisite combination. On the other hand, the three delight seafood noodle soup was unsatisfactory. Even for those who generally enjoy seafood dishes, the bland soup and soggy noodles were substandard.

As the last dish arrived at the table, I was extremely surprised to find the crispy short ribs inadequate. With the presentation of all the other orders beyond enticing, the rack of six measly meat chunks slabbed atop a wet lettuce leaf was less than appetizing. The texture of the rib meat was dry and dense, the lack of moisture compounded with the unsavory flavor resulting in a major disappointment. Being the most expensive dish of the entire meal, it was definitely substandard.

Reflecting upon my experience at Chun’s Dining, I believe there are far superior options for Chinese food in the area. Even with decent portions and stellar presentation, the lack of flavorful food and reasonable pricing doesn’t merit a return.