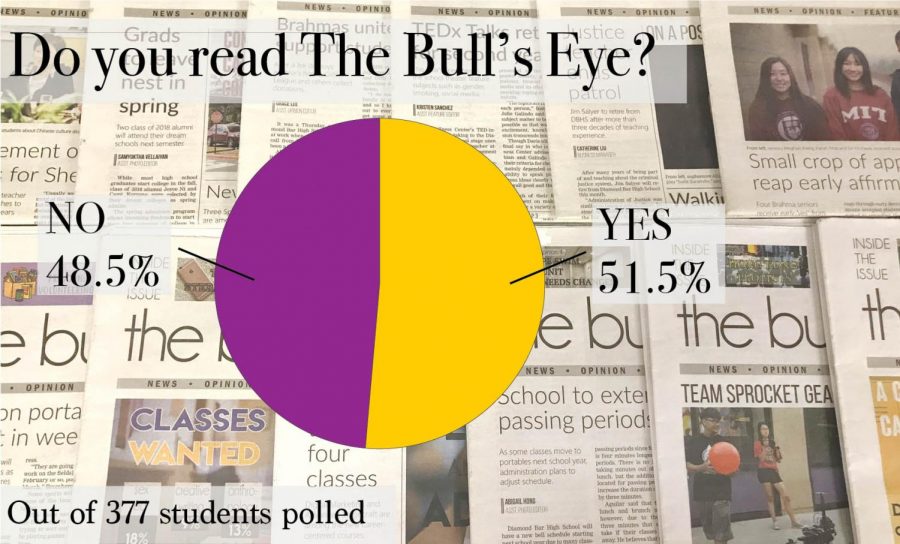 As someone unlocks their phone and taps on their News app, scrolling through the endless headlines that pop up, a print journalist packs up their bags and looks for work elsewhere.

With the rise of the Internet and social media, newspapers that were once filled with advertisements and flyers are now thin and disappearing.

Advertisements have been a primary source of newspapers’ revenue, garnering at least $49.3 billion in 2006, according to the Pew Research Center.

Now that a younger generation has flocked to digital news, advertisers have followed them, causing the newspaper industry to slowly crumble.

In 2018, 35 percent of newspapers’ advertising revenue came from digital advertising, an 18 percent difference from 2011.

These changes are now trickling down to the college and high school student publications.

The publication doesn’t receive any funding from the school district and relies on advertising and fundraising to support itself. In the past five years, advertising revenue for The Bull’s Eye has decreased by about $5,000 a year.

In May 2018, UC Irvine’s publication announced on its website that it would become solely digital due to a lack of funding. A newspaper fund referendum, which would have charged students $3 quarterly to help finance the newspaper, failed: 60 percent of undergraduate support was needed to pass it, but it only received 52 percent.

“I don’t think the future of college journalism looks quite as grim as people would like to think,” San Diego State University journalism major Bella Ross said. “I still see a lot of passion from student journalists that often goes unmatched by their professional counterparts. Given the political climate, I hope more people are starting to understand the value of journalism, even as the job becomes tougher than ever.”

Meanwhile, in some high schools, their newspapers’ layout transitioned from a traditional one to more of a newsmagazine where the front page resembles a magazine and each section only has a few stories. Many publications have also begun to focus on their websites and social media in addition to their printed versions.

“Within the next ten years, I would say most high school [newspapers], except for high school newspapers that are funded by the school district…[will] stop printing,” adviser Doug List said. “I just don’t see within ten years [that] the advertisers will continue to support to the level that’s necessary.”