Unexpected start to the season

GIRLS TENNIS Despite the absence of head coach, the team defeats South Hills, 16-2. 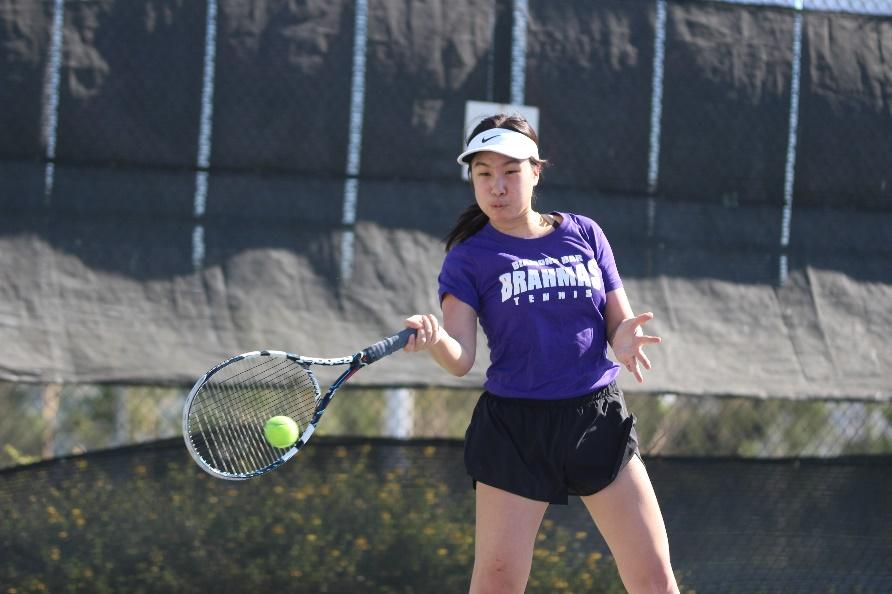 Junior Kelly Tsao hits a forehand in her doubles win to help the Brahmas win their match 16-2 against South Hills.

Even with their coach out on maternity leave, Diamond Bar High School girls varsity tennis team is determined to carry on.

Varsity coach Alexis Feix is taking a break from coaching after delivering a baby on Aug. 10. The team is currently under the direction of the boys assistant varsity coach Troy Wong, who is stepping in to help the athletes during practice. DBHS Athletics director Albert Lim will also be supporting the girls during matches along with Wong.

“Not having as many eyes on us is going to affect us as a team because Coach Wong won’t actually be at all of our games,” junior Lindsay Kashiwabara said. “The athletic director is a great coach but he won’t be able to give the same advice on our form or strokes that we would need during a match.”

During the first week of school, Wong focused on improving the Brahmas’ shoulder strength by implementing resistance band activities into their workouts.

Additionally, they have been working on serving and returning to perfect their game.

The varsity team currently consists of seven returning players and five new players. With inconsistencies in the coaches’ availability, Wong had the girls choose temporary captains to lead practices while he is gone.

Currently, the three captains are seniors Ellie Delano and Megan Young and Kashiwabara. The Lady Brahmas had a strong showing after winning their first home game against South Hills, 16-2.

However, their dominant performance ended with losses to El Dorado, Ayala and Wilson.

The team hopes to compete again at CIF and see individual improvement, regardless of their record.

“I think my personal goal and for the team overall is to do better each game because as long as you are improving, that’s all that matters,” Kashiwabara said. “I heard that this league that we’re dropping to is a lot better … and that a lot of people predicted that we are going to go a lot further than we’ve been before.”