Brahmas’ talent in the martial arts leads to success in tournaments. 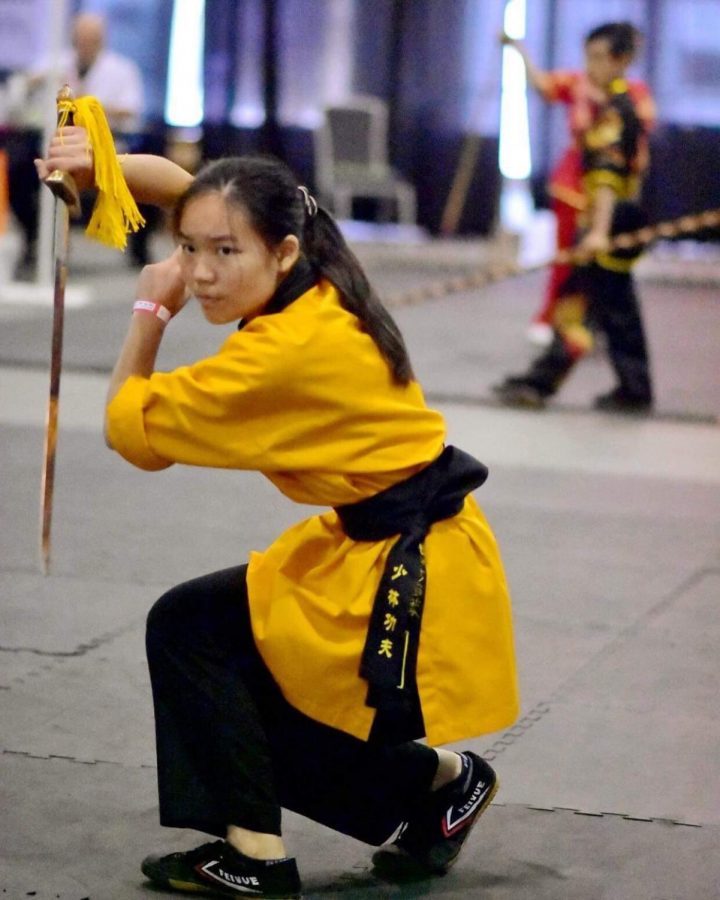 Poomsae. Sparring. Acrobatics. Forms. For a handful of Diamond Bar High School students, these are crucial elements of their lives, part of their martial arts practice.

Among students who have competed in national and international tournaments include junior Juston Chien and sophomore Joseph Nakaishi, who both practice taekwondo, and sophomore Jennifer Lai, who studies Shaolin kung fu.

practicing taekwondo when he was six. He goes to Chin Woo Quan Taekwondo Academy in Temple City, where he works on cardio, strength and techniques in three-hour sessions.

“[From taekwondo,] I learned about the various types of personalities from interacting with my teammates and how to manage them so the team could be productive during training,” Chien said.

Nakaishi is a third degree black belt and has competed twice in the Binational Games in Tijuana for a team called “ME.” To qualify for the team, Nakaishi won the California Challenge competition in sparring.

The sophomore also competed in sparring at other competitions, placing third at the 2014 USA Taekwondo National Champion

ships and second at the 2017 California State Championships.

He started practicing at YIC Taekwondo in Chino Hills when he was six because he needed to learn to calm down and his mother liked what the dojang offered.

During classes, he starts out with stretches and then practices poomsae or kicking drills, and during practice, he conditions the first hour and spars for thirty minutes or more.

“I’ve learned many things that have helped me in my life today like self-control, focus, and respect,” Nakaishi said. “If it wasn’t for taekwondo, then I wouldn’t be the same person I am today because of those qualities I’ve obtained from it.”

Unlike Chien and Nakaishi, Lai practices Shaolin kung fu, which originated from the Shaolin Temple in China’s Henan province.

She has competed at the 2017 International Chinese Martial Arts Championship, where she placed second in hand form, long wea

As a member of her kung fu studio’s performance team, Lai has performed at various places including the Asian American Expo, UCLA and the San Gabriel Playhouse.

When Lai was nine, her mother’s friend recommended Shaolin kungfu to Lai and her brother.

“At first, my mom wanted my brother to go and that I go with him for the first few times since she thought he would be more interested. After a few classes, I got hooked to it,” Lai said.

Lai attends the Shaolin Kung Fu Chan Academy in Rowland Heights and is currently a black belt, which is the fifth belt out of 10.

“[In kung fu,] I learned that it can take a lot of practice just to master one form,” Lai said. “Even though it may feel like it’s perfect just weeks after learning a new form, there is still much room for improvement.”