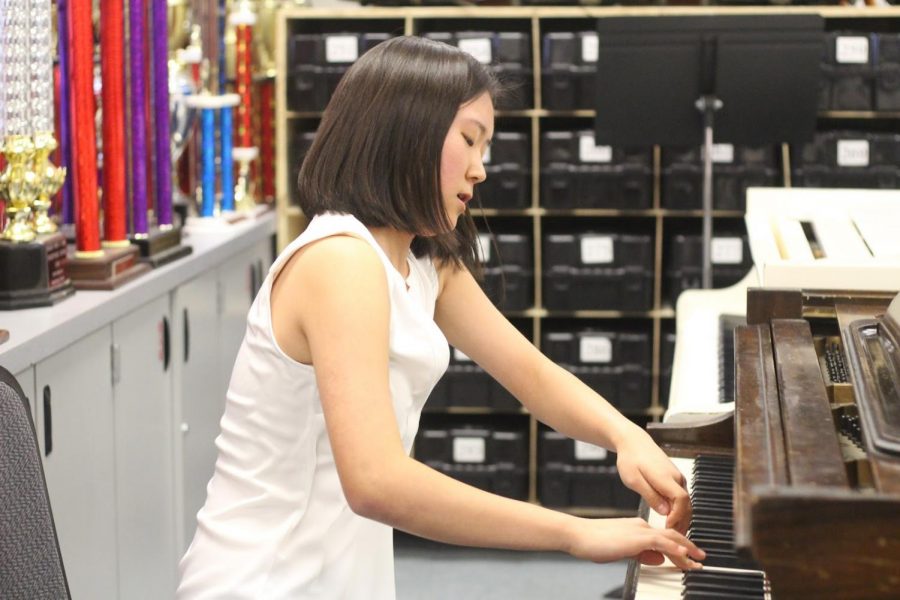 From banging away at the piano in her preschool daycare to becoming one of Diamond Bar High School’s most accomplished pianists, sophomore Mi-Hyun Suh’s hard work ethic and dedication to the piano has carried her to success in the field.

Suh, one of the winners of the DBHS concerto competition, will be performing alongside the DBHS Symphony Orchestra in their concert tonight in the DBHS theater at 7 p.m. She will be playing the Chopin Piano Concerto in E minor, which she was inspired to play after hearing South Korean pianist Seong-Jin Cho perform the well-known piece to place first in the 2015 International Chopin Competition.

Suh said she has videos of her playing the piano  all the way back in preschool, and screaming at the top of her lungs while pounding on an upright piano in her home. When she was only five years old, she started studying and practicing the piano more seriously, and now religiously practices 4 to 5 hours on school days, and 8 to 12 hours on vacation days.

Suh has placed high in multiple piano competitions over the years. When she was 13, she won the Diamond Bar/ Orange County MTAC Theme Festival despite being the youngest in her category. More recently, Suh was a part of a trio that won second prize and the Andrew Cook Beethoven prize at the Pasadena Conservatory of Music Chamber Music Competition. The trio played “The Four Seasons of Buenos Aires – IV. Invierno Porteño” by Astor Piazzolla, and each member of the team won  $1500.

Suh, in addition to playing the piano, is a talented flute player, having won first prize at the LANSUM International competition and at the Southwestern Youth Music Festival. She also won the Claremont Young Musicians Orchestra concerto competition as an eighth grader.

“I went against seniors that were really good, so [winning] was pretty shocking,” she said.

DBHS music director Steve Acciani attributes Suh’s great success in playing piano to both her hard work ethic long with her exceptional ability to understand music on a deeper level.

“She has an innate musicianship and an understanding of what music’s trying to express, so she goes beyond just notes and rhythms,” Acciani said. “In addition to that, she has an incredible work ethic, so she’s able to get her skill level to match what’s inside her, and that’s very unusual at her age.”

In the future, Suh hopes to attend a top music conservatory and pursue a career as a piano performer, teacher and college faculty member.

“Music is something that should be also for like the next generation,” Suh said. “I do music to share the beauty of it with other people.”