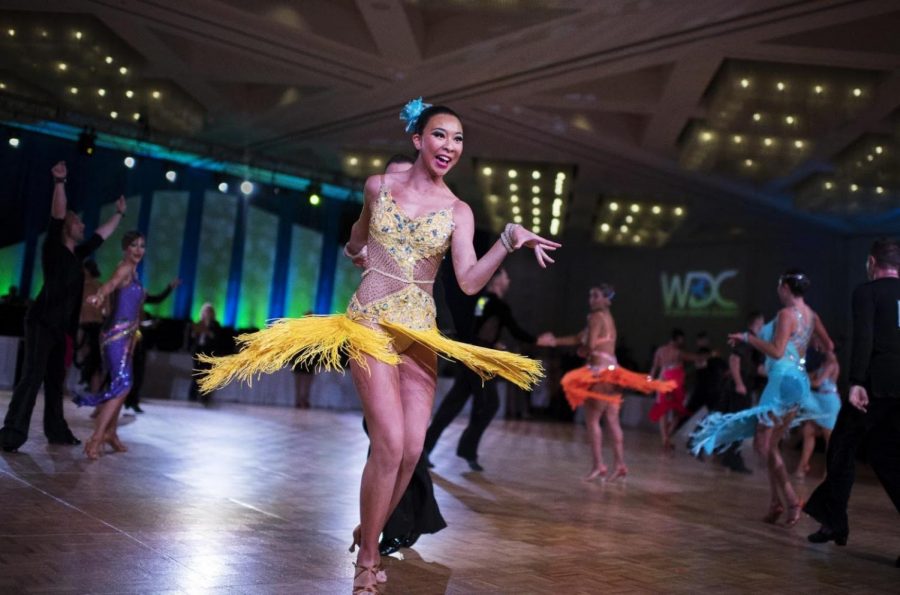 Spinning across the dance floor in heels, senior Christine Chan exposes an entirely different side of her, engulfed in the atmosphere of the ballroom.

Chan first learned to appreciate Latin dance in her early childhood from observing her mother practice and perform. Chan began her own pursuit of the art in fourth grade. Since then, she has discovered an enduring passion for ballroom dance despite having taken hiatus periods due to the workload of school.

“At school I’m more like a shy, quiet, more studious type of person and no one would expect me to do something as open as dancing,” Chan said.

Chan has attended three large-scale competitions, her most recent being the NV Ball Dancesport Championships. Competitions usually last two to three days, and athletes tend to stay overnight in Las Vegas the day before their event, as hair and makeup requires a hefty chunk of time in the morning. Costumes are often flamboyant, serving as a confidence booster for Chan.

“The most recent NV Ball competition I wore a yellow dress,” Chan said. “What you wear really gives you confidence. That dress was really nice, and once I put it on I just felt a surge of positive energy and I put that onto the dance floor.”

Whether practicing or competing, Chan is most accustomed to dancing with her instructor Dmitry Kurakin at Best Dance Studio. However, she performed with senior Willington Liu at Diamond Bar High School’s 2017 Spring Dance Concert, who describes Chan as “one of the easiest and one of the most committed people to work with.”

“[Dancing with a partner] just gives you a sense of security because a lot of other dances like jazz, hip hop and contemporary ballet, it’s just one person on the stage but this one is different because you have a person to lean on. They’ll help you keep your balance a little bit, and as the female role, I can use the guy’s power to help me turn faster,” Chan said.

Recalling last year’s dance concert, Chan stated it was one of her more memorable experiences.

“I didn’t tell anybody that I dance so my friends don’t really know, except for a couple of really close friends, and when people saw me on stage, they didn’t expect that was me because that’s so different from what I usually am,” Chan said.

“All five types are very active in the whole body but those two you get to have a little bit more fun in expression and movement,” Chan said. “[They’re] not as restrictive as the other ones.”

Aside from dance, Chan is also dedicated to her role as an editor in yearbook. This is her second year on staff, and she often spends her time taking  photos at volunteer events.

Though the future is not always clear, Chan said she plans to continue her aspirations in dance competitions after graduation from DBHS.