BOYS SOCCER Team posts 4-2 record in preseason as Brahmas prepare for the league. 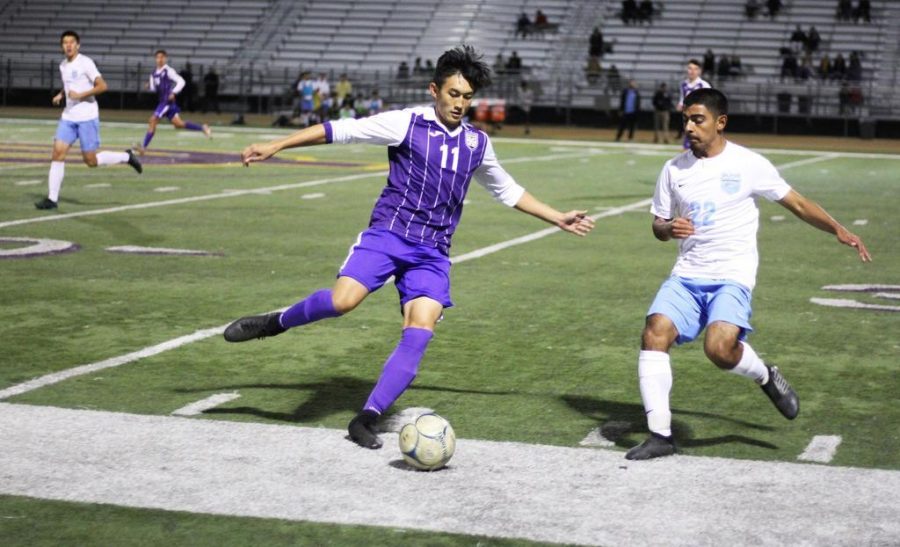 Senior captain Dwight Ritchie attempts to clear the ball in a rivalry game against the Mustangs, where they won 1-0.

Ready for a new season, the Diamond Bar High School boys soccer team is shooting to make a deep run in playoffs and is willing to work hard to get there.

The team is currently 4-2 in the season and played La Canada on Monday.

In preparation for the season, the team has done conditioning, practiced drills and scrimmages against other teams as well as past DBHS alumni. In addition to physical training, the team also mentally prepared themselves by going over strategy and positioning, according to head coach Kemp Wells.

“The game against the alumni, some players played pretty well, and we had a lot of chances to score even though we only put two away,” Wells said. “We found out how hard it was to play defense against players who might have a little more touch and more speed than we do, so we have to improve in that area.”

Wells said that the boys were able to use this knowledge in their game against Walnut, which they won 1-0.

“Against Walnut, much better game all the way around. That one, we never really thought they were very threatening offensively.”

Since most of their games are on Wednesday and Friday, the team plans to practice  conditioning and basic touch drills on Mondays and prepare for their upcoming opponent on Tuesdays and Thursdays. As of now they are working on passing and making runs off the ball.

“We don’t know much about the teams in our league, but we have heard they are all good teams and it is likely there will be no easy games for us in the league,” Team Captain Zachary Daniels said.

“We need to finish at least third in league. So goal one really is, make the playoffs. Goal two is to win the league [and] goal three would be to go as deep into the playoffs as possible. Since we are in division five, we have a shot at going pretty deep if we can get there, it’s just that our league is incredibly strong,” Wells said.

As the season rolls around, the team is depending on returning players to step up and perform exceptionally well.

“We always have quite a few that we are really trying to count on,” the head coach said. “We have Dwight Ritchie, who is a returning starter, he’s just moving positions. Chris Honda, hopefully will have a good year on the backline as well along with Irwin Chen and Nathan Lee. If those four can come together, we can be fairly strong defensively.”

Offensively, Wells expects to rely on younger players, such as sophomores Jaden Sanchez and Justin Bortis.