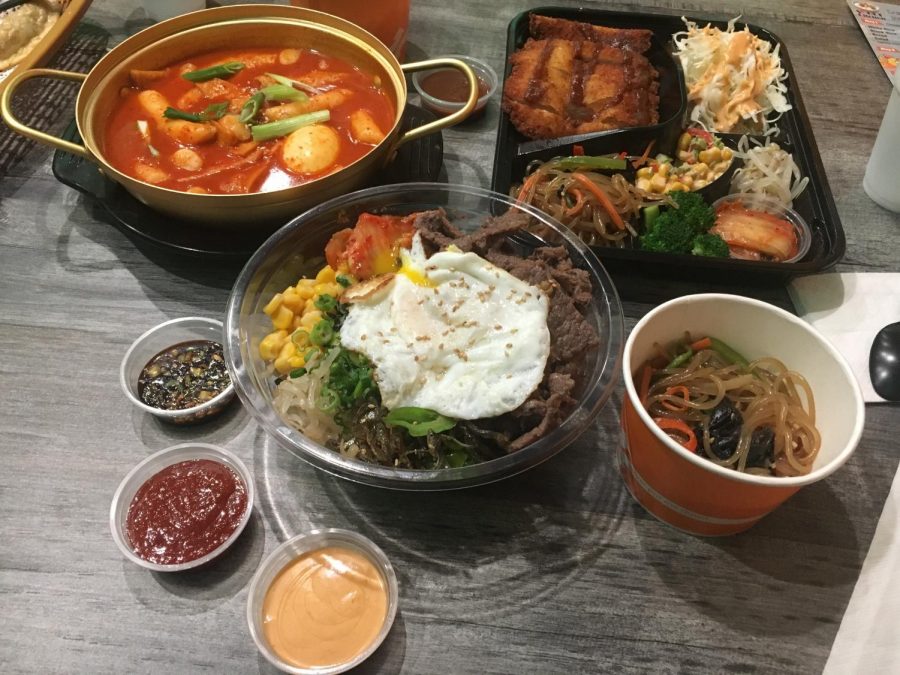 Situated in a corner of the H-mart Plaza, the restaurant is not nearly as flashy as the other Korean restaurants around it, with only a simple glass door and sign in front of the shop embellishing the modest shop.
Although the interior of the store is relatively small, the placement of the furniture gives an illusion of a bigger establishment The store sticks to a neat, modern theme with pastel green and white walls accompanied by simplistic tables and chairs. As the store emphasizes the convenience and to-go aspect of their food, the store does not provide much seating.

Each bibimbap is priced at $8.99. An option of white rice, black rice, bread or salad as the base is given, as well as a meat of your choice: beef, pork, chicken or tofu. Customers are allowed to select up to six vegetable toppings—such as fermented cucumbers, shredded carrots, bean sprouts, spinach, kimchi and more—along with one sauce from the choices of Gochujang, Triple S, Spicy Mayo, Pico de Gallo and Lemon Ginger sauce. Each order also comes with a free container of japchae, a Korean noodle side dish. My mother and I decided to order a black rice, beef, a variety of minced vegetables and Gochujang sauce bibimbap.

The black rice was slightly harder to chew than white rice, but I was pleased with the texture. However, the beef was on the tougher side. Despite being given a generous portion of beef, it was too difficult to chew, and I decided not to finish it. The Gochujang, a traditional Korean spicy paste, was the only thing that gave the plain dish a kick of flavor.
Despite the mediocre main dish, I enjoyed the side dishes and special dishes we ordered. In addition to the bibimbap, we bought ddukboki, rice cakes in a spicy soup base, for $7.99, donkatsu, pork cutlet , for $11.99 and dumplings for $2.99.

While the fried dumplings were plain and not very unique, the other dishes made up for it. The rice cakes were delivered to us swimming in a bright red pool of spiciness, along with a boiled egg and some vegetables. The rice cakes had a satisfying mochi-like texture, yet were still delightfully springy when chewed.  The donkatsu, served with two pieces of pork cutlet, seasoned salad, japchae, kimchi, rice and Korean coleslaw, was easily my favorite part of the meal. While my mother turned her nose up at how thin the pork cutlets were, I thought the thinness made the crunch of its exterior stand out much more, and the meat itself was also very tender. The sides that came with it were light and counteracted the greasiness of the meat well.

Although Seoul Kitchen’s food has some hits and misses, the sheer convenience of the store made up for what it lacked. The food is served fast and always in disposable containers with lids that can be wrapped up and taken to-go. It’s definitely a place I would go to again for a quick Korean fix.