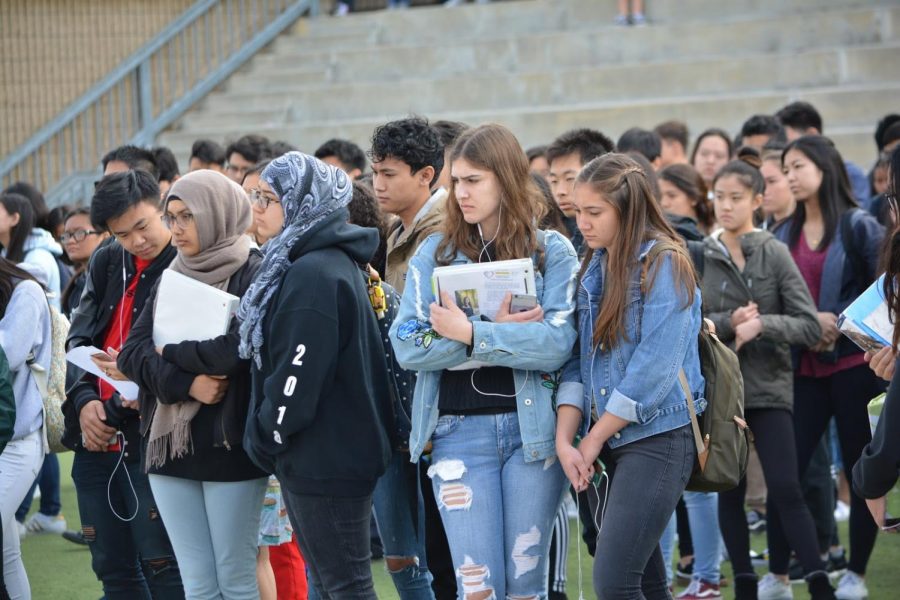 A gathering of approximately 2,200 Brahmas congregated on campus in the amphitheater to take a stand during the DBHS walk-out at brunch on March 14.

Students across the nation have not remained silent after the shooting at Marjory Stoneman Douglas High School, and voices from Diamond Bar High School were among those joining the nationwide call for action.

At 10 a.m. last Wednesday, students congregated in the school amphitheater for 17 minutes (one for each victim of the MSDHS shooting) to commemorate the young lives lost at Parkland, Florida on Feb. 14. Though teachers were urged by administration not to attend, approximately 10 staff members were seen at the rally.

Organized by Diamond Bar’s High School Democrats of America, the demonstration was approved by Principal Reuben Jones after the club’s officer board submitted a written proposal to Activities Director Janna Van Horn.

“The overall intent of this rally [was] to have a message that students at Diamond Bar altogether want to say that we stand with the Parkland victims and that we are dedicated to having safe schools,” HSDA president junior Hamzah Daud said.

Donned largely in black, around two-thirds of the student body attended the event, according to HSDA officer junior Amelie Lee. As Brahmas formed a crowd in the amphitheater, adult protesters supporting the walk-out assembled outside the gates.

The event continued as planned, and six students spoke to address various points regarding safety, activism and gun control. A moment of silence was also held in commemoration of the victims from MSDHS.

Daud opened the speeches with a brief introduction before launching into his oration on school security.

He then handed the microphone to junior Ryan Shah, who spoke about a friend of his in Florida who attends MSDHS.

“Sofee, a junior like me, who should be thinking about college, SATs and just enjoying the last few months as a junior, is instead attending funerals, one of them being her neighbor’s, who was shot in the head, chest and hand,” Shah said during the event. “She was only fourteen years old.”

“Political activism is more important now than ever in today’s political climate,” Mansour said. “No matter where on the political spectrum you stand, those hoping for things to change can no longer afford to sit back and watch things happen.”

The pair closed out their speech by urging students of legal age to take their opinions to the polls.

Senior Shing Lin and junior Yuwen Wang next spoke out on the gun control scene, addressing the lack of legislative regulation surrounding the weapons.

Lastly, Daud again took the stage to conclude the rally, and students returned to their normal school schedules at 10:17 a.m.