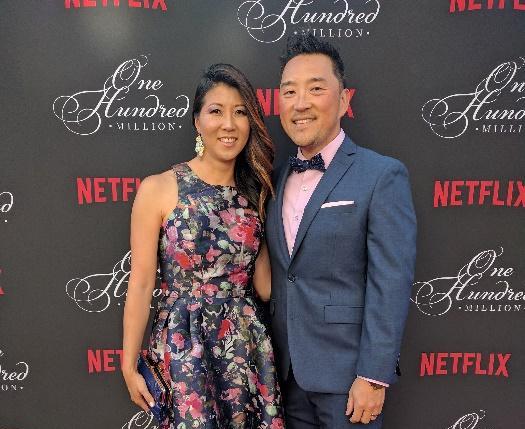 Alumna Connie Cho (left) poses with her husband for a photo at the red carpet during the“One Hundred Million Subscribers” celebration for Netflix.

Despite having no prior experience and interest in the entertainment industry, Diamond Bar High School class of 1994  alumna Connie Cho Lee now works for one of the most high-profile companies in the industry: Netflix.

“I sort of fell into it,” Lee said. “I didn’t always dream of working in entertainment. I’ve always held jobs related to entertainment, publishing or editorial.”

Having worked at Netflix for 12 years, Lee is the director of title operations. She currently leads a team of 90 people that manages to secure licenses from partnerships to ensure launch readiness of titles. Along with her team, Lee confirms that all components of the project—specifically subtitles, dubbed audio, artwork and trailers—are ready to be displayed on Netflix. As a group, the team handle hundreds of titles and partnerships per year.

“Since I’m a veteran at the company and also in a leadership position, it’s a passion of mine to mentor younger people or anyone new at Netflix since our culture is unique and one in which one can thrive,” Lee said.

Before Netflix, Lee’s artistic side showed with her interest in design and editing. During high school, Lee was involved in yearbook, becoming one of the Taurus editors. After she graduated from DBHS, Lee set her mind to become a psychologist while attending UCLA.

Lee continued her passion for editing by working for the UCLA newspaper and securing a job as an editor for a small youth magazine. She also participated in copyediting classes to hone her skills.

She graduated from UCLA in 1998 with a major in American Literature after she realized the medical field did not fit her interests.

“This [major] is what set me on a path to really want to pursue magazine publishing, online or print, as a career,” Lee said.

Lee went on to New York University for a master’s degree in publishing, graduating from the two-year program in 2003. While pursuing a master’s degreew, she worked and interned at publications including Scholastic, USA Today and Conde Nast Traveler.

After completing her master’s, Lee moved back to Los Angeles and worked for a small magazine company as a copyeditor. She later discovered the then-new company Netflix by signing up for a free trial to binge watch her favorite show, “Project Runway.”

Fascinated by the company’s work, Lee browsed through a few positions online and applied for a copy editor role for fun, as she already enjoyed her previous job. Four months later, she was called for an interview and received the job to manage the workflow of freelance editors at the company. She later moved on to streamlining operations leadership roles and has stayed in the field since then.

Working at Netflix for 12 years now, Lee loves that her job enables her to impact lives by bringing others joy with Netflix content. She has also been able to travel to multiple countries, mostly in Europe and Japan, and build teams to support Netflix’s global operations in Amsterdam and Singapore.

“I’ve certainly gained a ton of business knowledge but also learned how to deal with all kinds of people in all cultures and places,” Lee said. “I have much pride to work for Netflix in our feedback-driven culture. It has been the highlight of my career and I hope to stay here many more years.”

Lee advises high school students to reach out and do internships, as it significantly guides her narrow down what career to pursue.

“Do as many internships as possible in different areas of interest,” Lee said. “It’s OK to not have a specific vision of what you want to do as a career. Be open and just start out trying something. Then you’ll learn what you’re good at as well as develop new skills and interests.”