WATER POLO The team’s inexperience is an obstacle they hope to overcome when season begins. 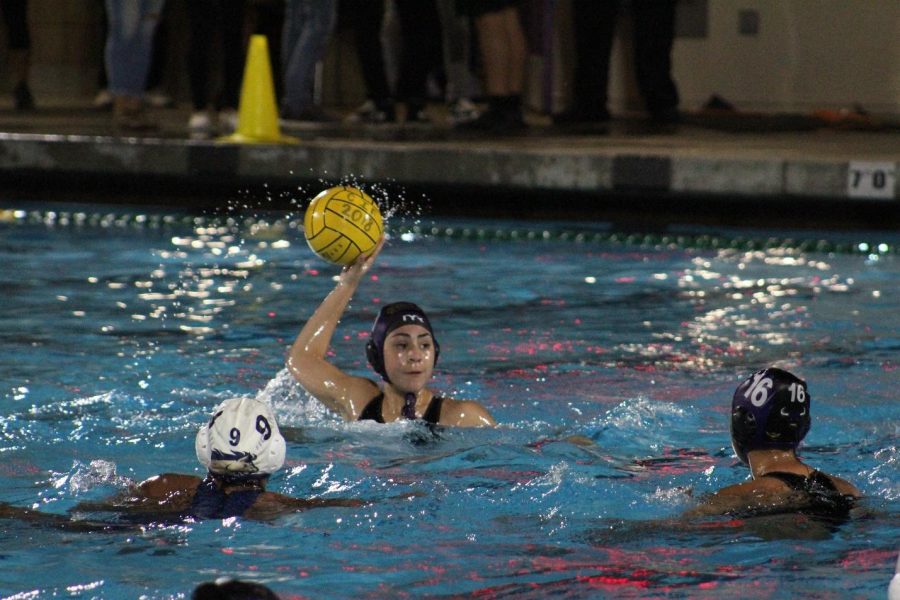 Senior Priscilla Franchino surveys the field for an open teammate in the rivalry season opener win against Walnut, 9-8.

In the preseason, the Lady Brahmas narrowly won a game against Walnut High School, 9-8, but lost the next three games to Montebello, Poway and Valhalla in the Claremont Tournament. They defeated Warren High School in the final game of the tournament but lost their next two games to Milikan High School and Santa Ana Valley High School.

“Our records are not very strong right now. We’ve started off with some very tough games. But…it’s going to benefit us down the line anyway,” coach Devin Hunter said.

In the match against Walnut, the Brahmas were down by four goals for most of the game and came back in the second half to take the game by one point.

“It showed a lot of resilience from the girls, showed a lot of effort, despite us not playing to the best of our ability,” Hunter said. “It being the first game of our season, I was very impressed with how the team went out and finished the game, especially to get the win.”

To prepare for the season, the team practices every day except Sundays and game days. Each practice is broken up into three segments. For the first hour, the players work on offensive individual skills such as shooting, passing and driving drills. Following the technique training, they focus on team drilling. To finish off the three-hour practice, the girls condition with various swimming sets.

One obstacle that the team faces is the loss of many experienced players, as graduating seniors made up most of last season’s team. However, the girls are committed and willing to put in the time to improve. According to Hunter, the players that have shown the most potential are seniors Kristina Mariani and Natalie Marron and junior Katelyn Arauz.

“Although it is a weakness not returning many of those skilled players, we do have a lot of girls that want to get better,” Hunter said. “And we’re going to get better towards the end of the season.”

The team’s main goal is to win the league title for the first time in school history. Hunter believes that moving to a new league, which is not as well-known for aquatics than the previous Palomares League, will allow the team to make this historic mark.

“With us being in a new league this year…we should have a good chance to win league for the first time,” Hunter said. “If we win league, it’s an automatic [pass] into playoffs, so I think we’re in good position to do both—to win league and to make the playoffs.”