Kicking off the season strong 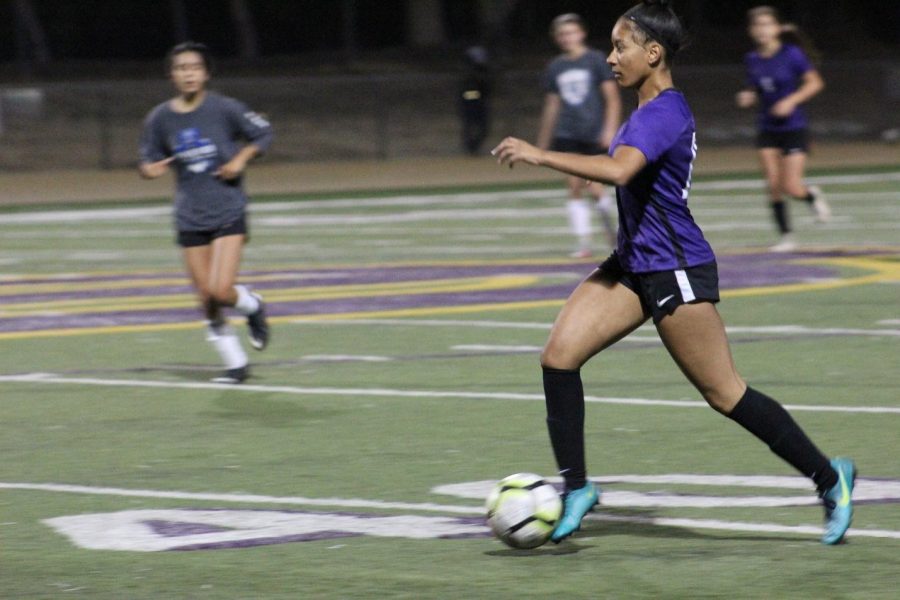 Senior Jordyn Beaulieu looks to make a pass during a DBHS scrimmage against Diamond Ranch.

Since injuries have been an issue for the past few years for the Diamond Bar High School girls soccer team, head coach Matt Franco decided to address the problem early on.

To deal with this problem, Franco has focused on muscle training during the preseason.

“[The players] haven’t had any major injuries and all of them come back from club in pretty good shape so hopefully it’s worked out,” Franco said. Many of the players train for and play soccer for off campus clubs.

The team started strong, winning its first season match against Wilson, 3-1, with goals scored by senior Jordyn Beaulieu, junior Madison Bernardino and sophomore Emily Le. The team tied in their second match against Roosevelt, 1-1, and suffered its first loss in their third match against Huntington Beach. In their fourth match against Bishop Amat, Diamond Bar tied in a score of 1-1. The team also played against Edison and Claremont and will play against Los Altos High School tomorrow.

“We are really young, but I think our strength is [that] our players are fairly equal to each other [in skill],” senior Samantha Hong said.

With the team moving from the Palomares League into the Mt. Baldy League, Franco said he wasn’t thrilled with the quality of soccer in the new league since the prior league presented more of a challenge for the team.

“We played our same style—this league will be a little scrappier, a little more aggressive,” Franco said. “That hard nose type of play if they lack some of the skill that we are used to against other teams.”

Although the team lost their starting goalie Sam Blazek and outside back Jaclyn Marinez, Franco said that senior Alexis Nguyen and sophomore Megan Nadal have stepped up to fill that gap. Since the team consisted of a young roster last year, many of the returning players are expected to return to the starting lineup this season.

“I want them to communicate quite a bit and just move the ball, get to know each other get comfortable with each other, understand our strengths and weaknesses as individuals and as a team,” Franco said.

According to Franco, the team will be led by seniors Beaulieu, Olivia Valdivia and Sarah Mansur, with half of the team consisting of underclassmen.

“[My goal for the season is] consistency, having our girls play our game our style no matter the level of competition,” Franco said. “Making sure that we stay calm and composed—as I said play our game—without getting rattled by other styles of play.”