GIRLS TENNIS Despite a strong showing in the league, the girls prepare for far tougher teams. 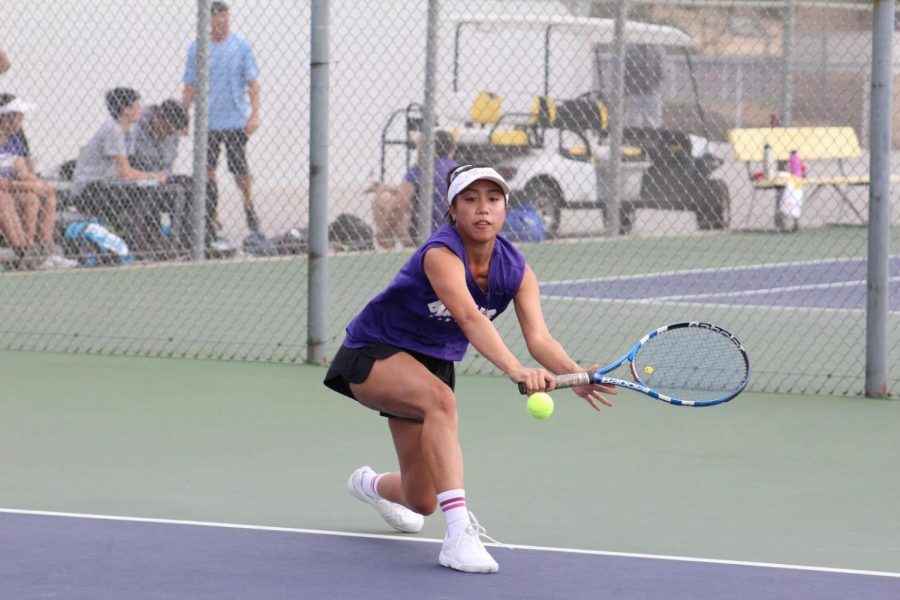 Senior singles player Ellie Delano steps into a backhand return in a 11-7 loss against Montclair, the team’s only loss.

The Diamond Bar High School girls tennis team had an exceptionally strong season, resulting in a league record of 4-1.

Even though there are some advantages to dropping down a league, the Lady Brahmas said that they miss the challenging aspect of the sport. According to junior Lindsay Kashiwabara, the teams in this new league do not hit the ball with enough force. Though this seems more like a benefit than an issue, the competition the team is anticipating to face in CIF will be harder to play against.

“Obviously we like to win but it is not as competitive as we would like it to be,” Kashiwabara said. “A lot of times it just doesn’t feel like a tough game because if you look at the scores, they are not super close.”

To maintain their strength, they have been practicing with the junior varsity and varsity boys tennis team.

“They hit a lot harder that the girls in this league,” Kashiwabara said. “We just need that experience of playing against people that hit hard to us because when we go to CIF, we won’t walk in being all confident from league and then getting our butts kicked.”

The team is working on maintaining their energy level during practice to retain the competitive spirit necessary for CIF.

“Just because we dropped down a league, does not mean we can lose our energy and effort,” junior Kelly Tsao said. “It also matters about your opponent because if your level drops and you play with them then our level drops because the competitiveness and effort required is gone.”

Thus far, the team hasn’t faced major injuries. Working with resistance bands and cooling down by stretching has helped the athletes build their shoulder strength and avert their chances of injury. Having the coaches help the players with their form also lessened the players’ probability of injuries.

In previous years, the Brahmas have placed third in league, setting them as the wild card for CIF. Since they have moved down a league, the Brahmas strive to place first. Knowing that CIF is much more arduous than their current league games, the ladies are keeping their heads down until CIF arrives.

“Overall, we are just trying not to let our egos get too big and are just keep working hard to improve ourselves.” Tsao said.