Escaping into a world of music 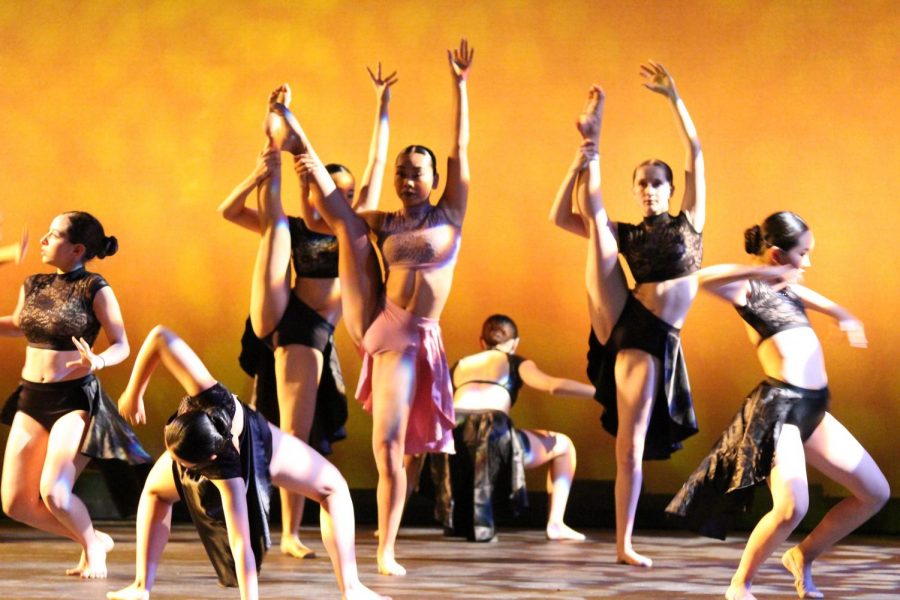 Two evenings of dance allowed audiences to escape into a world of music and expression, as presented by Diamond Bar High School’s Dance Department for  its spring concert.

Titled “Escape,” the show was performed May 10 and 11, showcasing pieces choreographed by students, along with several competition routines.

The concert started with dance team’s dramatic competition piece “So it Begins,” a lyrical dance full of intensity and emotion.

The concert featured multiple soloists, including senior Angelica Fuentes who beautifully choreographed an elegant and graceful routine to “Oceans,” by Hillsong. Senior Zach Chan also stood out with his upbeat hip-hop and breakdance routine “Moving.” Chan’s spirit  was seen when he lost a shoe, having to take off the other one mid-routine.

One of the most entertaining pieces was “Windmill Kidz,” which was performed by members from the dance company and advanced dance sophomore Esha Sharma to the song “Can’t Stop the Music.” The routine was clearly inspired by the viral video clip from the TV show “Emu’s TV Series,” where the actors on the show introduce themselves through song and begin dancing and singing in 1980s fitness instructor style. The dancers dressed like the actors in bright colors and tutus and mimicked some of the moves, while incorporating their own.

Another  memorable performance was the hip-hop style “Chunky but Funky,” choreographed by senior Angela Yamboa to the hit song “Finesse” by Bruno Mars and Cardi B, and performed by members from the Dance Company. With colorful outfits and bold movements, the piece was fun to watch.

Utilizing the emotion from the song “This is Me” from “The Greatest Showman,” members from the Dance Company performed “This is Us.” In addition, the lyrical duet between junior Katherine Tran and senior Timothy Young was incredibly moving as the two danced to Sam Smith’s song “Life Support.”

Another amusing routine was “All Types of Love” where the group of All-Male performers pretended to debate about what love really is, with freshman Brian Wen dancing with a rainbow pride flag.  The performance was extremely funny, while bringing a more meaningful message to the stage.

To finish off the action packed night, the All-Male dance crew performed their routine labeled “Clocks,” and left  the captivated audience energized and wishing for an encore