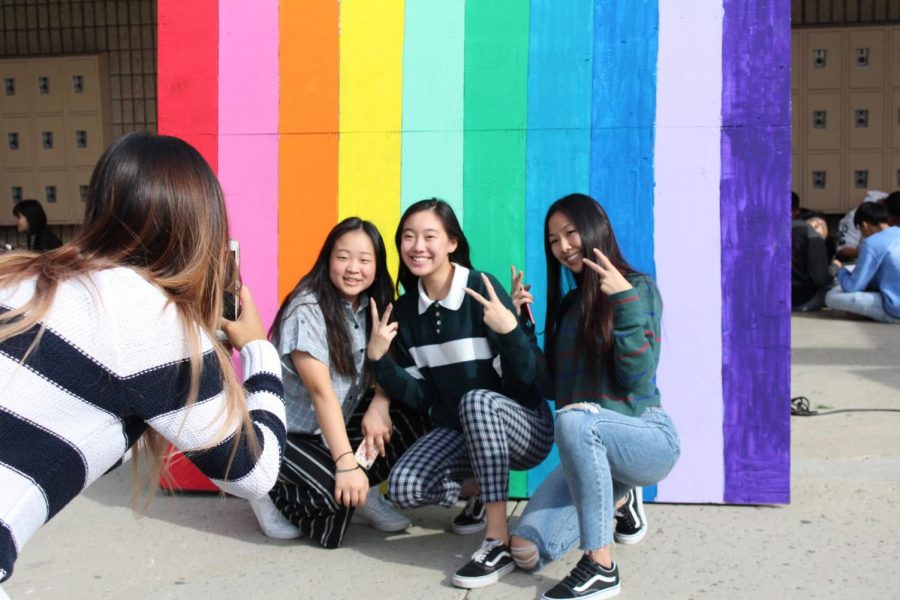 From left, juniors Eunice Sim, Jennifer Nie and Carina Wu pose for a picture before a rainbow backdrop in the upper quad.

Held at the end of November during lunch in the upper quad, Visual Arts Week offered multiple pieces of art with the theme of happiness, which each artist interpreted differently. Among the categories of art included were acrylic paintings, photography, calligraphy and Hydro Flask painting.

The event was non-competitive, aiming simply to open an opportunity for anyone to display original artwork on campus.

“I’ve always loved painting, and when they had the opportunity to have a Visual Arts Week—because they usually never have stuff like that here—I wanted to showcase something that people could actually see,” senior Tristen Baca said.

Baca took inspiration from the movie “The Perks of Being a Wallflower” to create her acrylic painting, which depicted a boy in the back of a truck with his arms out in the wind.

“It’s kind of a realization, a turning point in his life, when he is content with himself,” Baca said. “The scene was really important and I thought it was a cool thing to put on a canvas.”

In the future, Baca said she plans on pursuing art with hopes of becoming a freelance artist.

With a background in photography, junior Saarth Trived saw the event as an opportunity to get involved and let others see his photos on subjects like the stars, a tropical paradise and the city at night.

“What inspired me, honestly, was my family, because I learned photography from my dad,” Trived said. “It was about two or three in the morning, and we took two separate photos of the stars and cars and everything. We then blended them together in Photoshop and that was the end product.”

When thinking about how to approach the theme of happiness, senior Megumi Yamamoto wanted to paint something that was unique.

“I took the meaning of happiness into a more abstract concept and I used colors that convey happiness like orange, yellow, red and drew a scene in a city where people are having fun and it is festive, in a way,” she said.