Construction to start in 2019 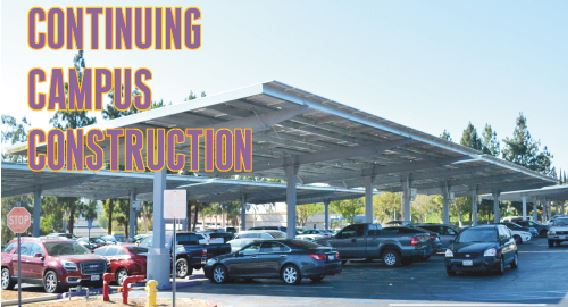 Beginning this summer, Diamond Bar High School started undergoing a series of construction projects to modernize the campus. Included in these are the covered parking area in the front of the school, the new exterior LED lighting and AC units in the 100 and 200 buildings.

Painting of the buildings, including the student lockers, is also underway and, according to operations manager Mike Bromberg, is likely to last until winter.

The solar panels that sit on the top of the parking lot covers are scheduled to be completed this month. The energy they collect does not go directly to the school, however.

“The solar puts back electricity into the grid. Thus, the district pays a lower electricity bill,” Bromberg explained.

According to Bromberg, construction of the portables is set to begin this spring. They are being built to accommodate English and history classes during the renovations to the 400 and 500 buildings. They were original scheduled to be ready for this school year.

The setting up of portable classrooms and modular restrooms on the baseball field will likely last until summer of 2019, according to operations manager Mike Bromberg.

The three-story band building will be constructed at the same time the 500 building is being renovated. In the meantime, band classes will stay where they currently are. All music programs will move into the new building after construction is finished.

The old band room will house the new Golden Horseshoe and the office of the athletic director. The current Golden Horseshoe will be remodeled into a science classroom, as will the other classrooms in the building.

That building, which was a temporary structure to begin with, will be modernized. Additionally, both an elevator and equipment room will be constructed. These renovations will likely begin in summer 2019.

During that time, students will follow a revised schedule to accommodate the walk posed by the distance between the main campus and the fields containing the portables.