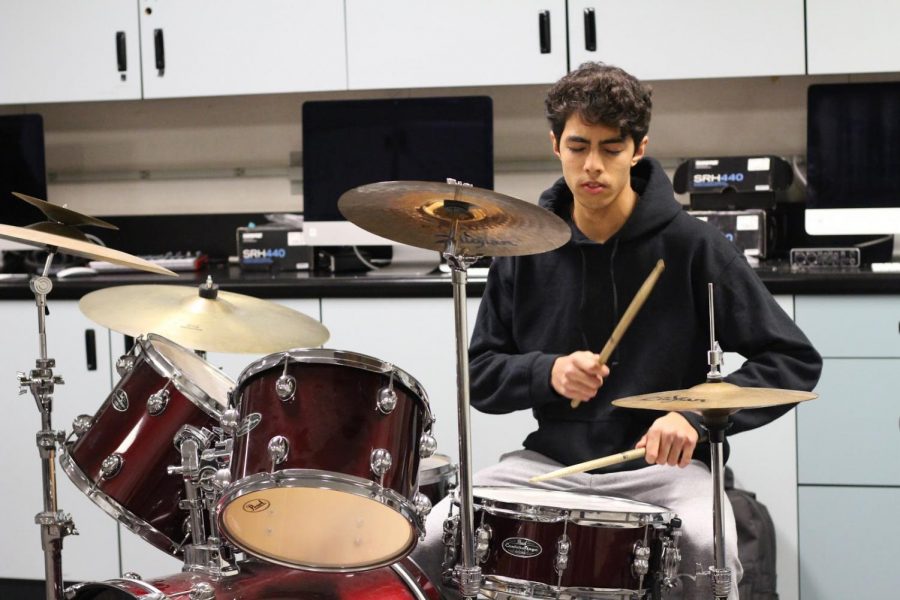 Senior Ryan Shah practicing on a drum set for the upcoming concert.

Commercial music will be celebrating the history and culture of rock music with their fall concert. The Nov. 30 commercial music program concert, “Women in Rock,” highlights female talent throughout rock ‘n’ roll history.

Inspired by the eight female vocalists in the program, director Daryl Hernandez wanted to honor women in the music industry.

“[I wanted] to give them material that would be more in their range and to highlight women’s contribution to rock ‘n’ roll,” Hernandez said.

Hernandez stated that women have contributed as much to the music industry as men have and he wanted his students to emulate that.

“Having a concert based on women in rock is great because it shows how women shaped the music industry,” senior drummer Ryan Shah said. “So many classics we hear today were created by women and it’s an amazing opportunity to be able to showcase their work.”

In a male dominated society, the upcoming concert reminds viewers of the importance of women in the music industry.

“It is absolutely important to spread awareness about women in the music industry,” Shah said.

Showcasing female vocalists in the concert also allows the everyone in the program to concentrate on their individual sets.

“[The female vocalists] can focus less on trying to learn songs that may not be in the range and more on their stage presence,” Hernandez said. “The band can [also] focus more on being a band.”

This concert not only features females in rock but also includes one of the biggest collection of musicians from  commercial music.

“The program has grown and we have a lot of new students, so we are getting a lot of variety in the talent,” Hernandez said. “ I may have some first year students who have been playing their instruments…[or] students [who] go through the program to learn the ropes.”

The new students give the program more room to experiment with the styles of music.

There are students of all levels in every song on the setlist.

Hits such as Joan Jett’s “I Hate Myself for Loving You,” Madonna’s “Into the Groove” and Janis Joplin’s “Me and Bobby McGee” will be featured.

“Women in Rock” will be held on Nov. 30 at the DBHS theater. Tickets are $5 for students and senior and $8 for adults.