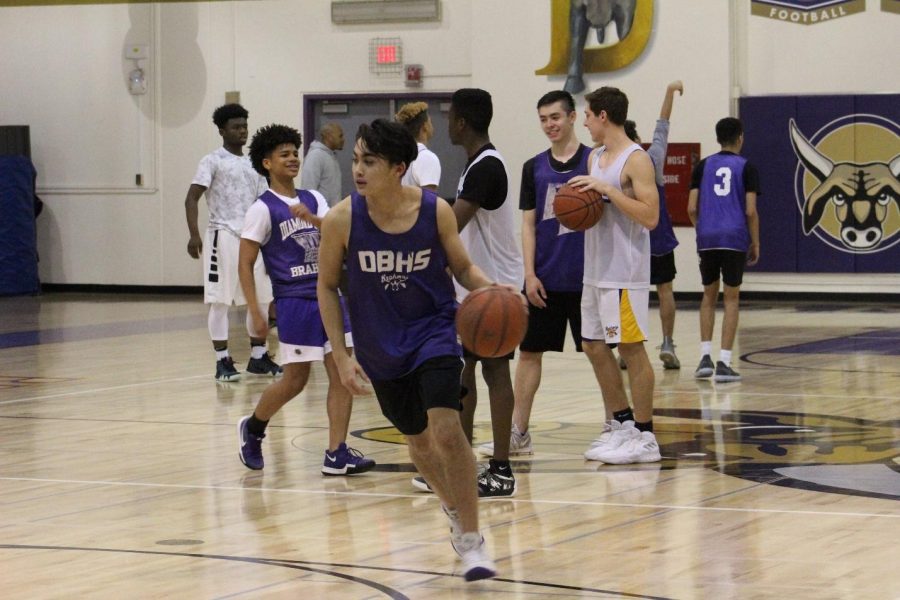 Junior Noah Del Campo and the team practice drills to prepare for their next games in the recent El Rancho tournament.

Starting yet another season strong, Diamond Bar High School boys basketball team has been blowing through their opponents, compiling an early 7-2 record.

Though the boys have yet to play a league game, they  have been playing in  seasonal tournaments. They went 4-0 in the San Dimas tournament, where they won the title against Los Osos. However, in their season opening rivalry game, they lost to Walnut by 16 points, 57-41. In the El Rancho tournament, the boys went all the way to the championship game but lost in a close triple overtime game, 75 -74.

“The Walnut game aside, I think we are playing decent. We have a talented senior riddled team so expectations are relatively high,” head coach Henry Frierson said.

Against Walnut, the team  shot 38 percent from the field, with seniors Mike Gao and Justin Herrera the only players to sink above 50 percent of their shots. The team also had  22 turnovers, losing many  of their possessions due to miscommunication. However, after the Walnut game, the boys learned from their loss and found their  rhythm.

“I think as a team we learned to value possessions, execute at a much higher level, and to not let our emotions get the best of us,” Frierson said.

In all four games of the San Dimas tournament, at least two players were able to score more than 10 points. Senior Myles Corey dropped 24 points in the victory against Barstow, and Gao had a double-double with 10 points and 10 rebounds.

In the San Dimas title game, the boys took the game in the second half. They started the half down by two but finished with a 12-point lead.

In the El Rancho title game, senior Casey Pua scored 21 points off the bench with 72% from the field, but the boys lost due to their 21 turnovers.

“It’s our first step onto our season and we have hope of this season, so it’s a good start. Whatever it takes,” said Gao.

This season, the boys starting backcourt consists of seniors Corey and Amir Hunter, with seniors Gavin Clements as small forward, Bryan Reyes playing power forward and senior Gao at center. Frierson plans to focus on the team’s shooting to prepare for the tougher defensive teams as well as tune his players’ characters.

“Well I think first and foremost my goal is to help in the development of character and confidence in our young men,” Frierson said, “A back-to-back league championship and CIF birth are not far fetched.”

The boys improved their game from last year by competing over the summer. They competed in the St. John Bosco Summer League, where some of the toughest SoCal teams compete. Some of their opponents were Compton, Santa Margarita and St. John Bosco, which ranks 40th nationally.

“This summer we intentionally threw the boys into the fire by playing the best talent Southern California has to offer and they rose to the challenge,” said Frierson.

Frierson said he expects the most out of them due to their competitive spirits and their perseverance, performing like they did in the San Dimas Tournament.

“I think I am extremely fortunate to have a group like this one,” Frierson said. “Even more impressive than their level of skill is how tough they are,”

The Brahmas play at 7:15 p.m. tonight against the Azusa Aztecs on their homecourt.