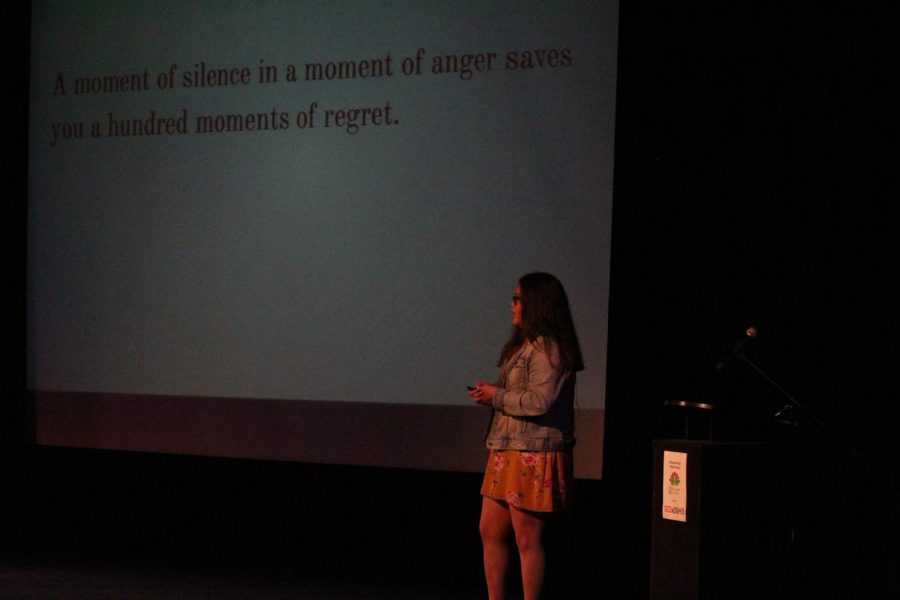 Senior Vivianna Retamosa shares her experience with anger in a TEDx Talk, hosted by the Wellness Center, on stage during fifth period on Nov. 28.

In periods one through six on Nov. 28, teachers who signed up to attend the TEDx talks brought their classes to the theater to hear three presentations each period.

The most talked about speech was presented by junior Salma Rashad, who spoke to her third period audience about fake news. During her TEDx talk, she presented two poems written around two years ago: “So Blind,” which she composed for a competition, and “The Truth,” which she wrote with her brother, who submitted it for a class assignment.

After hearing a stanza of “The Truth,” the audience was abuzz. The stanza read: “What’s the point of freedom of speech / If people are too afraid to preach and teach / If people know the truth but don’t let it leak / I beseech them to reach for their bleach and drink.”

“I feel like if you know the truth, if you know what’s happening and you don’t take it upon yourself to spread it, then there’s something wrong with you,” Rashad said. “The truth is something that deserves to be heard, everyone should be able to hear all of the truth…I’m really really upset that people took it out of context.”

Though she has not had any personal experience with suicide, she wanted to inform others about suicide and provide resources such as hotlines and the school psychologist.

“I think it’s just something that isn’t really talked about and bringing a light on it could be beneficial because there probably are students here who are struggling with that, so I kind of wanted to just shine a light on it,” Wilhelm said.

Sophomore Kelvin Wang spoke during fifth period about his previous addiction to video games and about how visiting his grandparents in China during the summer after seventh grade changed his life.

He overheard his grandfather tell his parents that their son was a “disgrace” because of his constant gaming.

According to Wang, this ignited a fire inside him to not only quit gaming but to prove his family wrong. Wang is currently a straight-A student who is involved in Team Sprocket, the robotics team on campus.

“It’s your job, your right, your destiny to speak up against it and rise up to prove other people wrong, that if they see you in one way, that you can…prove to them that in fact, you are so much more,” Wang said.

Senior Crystal Calero also spoke during fifth period about her struggles with her facial deformities of cleft lip and cleft palate, which are unfinished structures that can be located in the upper lip, the roof of the mouth, or both.

“I just want to let everyone know that it’s OK to stand out and that it’s OK to be different no matter what it may be, physical or not, and just being able to love ourselves for the way that we are,” Calero said.