Brahmas cause a splash

BOYS WATER POLO The Brahmas start strong with a 3-2 record. 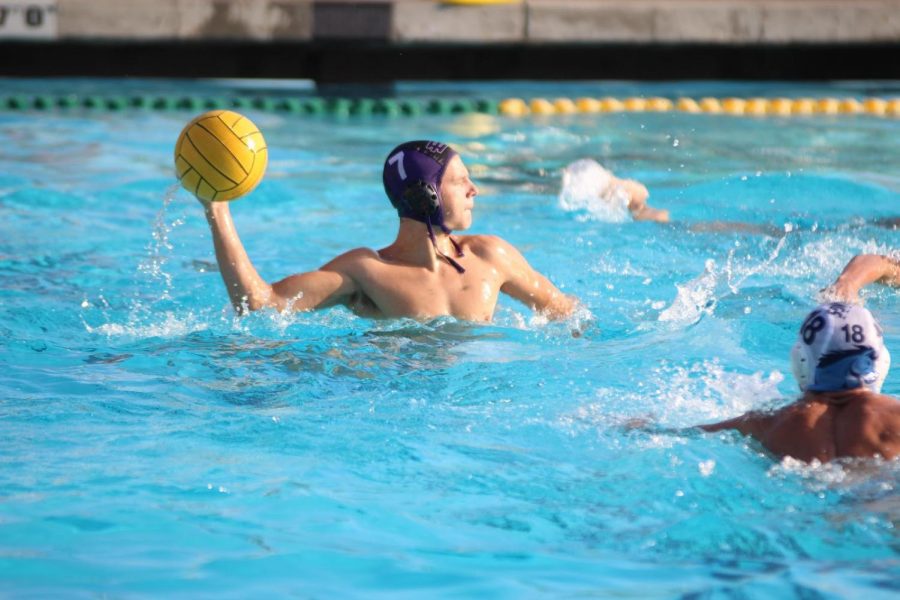 Senior Jason Hellmold scans for open drivers during the game against Walnut.

With a new coach, players and league, the boys varsity water polo team is approaching this season with high hopes and expectations. The Brahmas are diving into the new season with an overall record of 3-1.

The boys had a rocky start with a scrimmage loss to Walnut 13-8, but they then won three out of the four next games. The Brahmas beat Wilson High School  16-5 and Bonita 10-5. This winning streak ended when the team lost against Yorba Linda 14-11. However, they dominated their next game against Norco 13-5.

“As a team this season, we plan to win league and try to win CIF, but that will take a lot of dedication and hard work,” set player senior Sebastian Galelli said.

Gary Cheever, the team’s new coach, doesn’t plan on making any major changes to the program but instead continuing the work of former coach Alexander Matal.

“My plan is to challenge each player to train harder then they trained the day before. The boys feed off each other, when they see the guy next to them trying to step up, whether it is in swimming harder, lifting more in the weight room, or challenging each other physically in drills,” Cheever said via email.

The team lost many seniors last year, so multiple junior varsity players were moved up to varsity to fill in the spots. With key players such as Galelli, goalie Raphael Mutuc, defender Brandon Lin and wing/set guard Matthew Kim, the team remains a strong united front.

The boys practiced over the summer as a team, in clubs and individually. During the school year they practice five to six times a week, and three of those days are spent in the weight room.

“Our main focus during practice is to play hard and play physical. This will help us push teams to their limits for four quarters,” Cheever said.

According to Kim, some improvements that have set apart this year’s team from last year’s squad is the amount of dedication shown by each  team member.

“Last year we struggled with commitment off season, but this year the commitment was definitely there. It showed because there was drastic improvement in almost every player since last year,” Kim said.