The athletic equipment attendant aids a Diamond Bar stabbing victim in May. 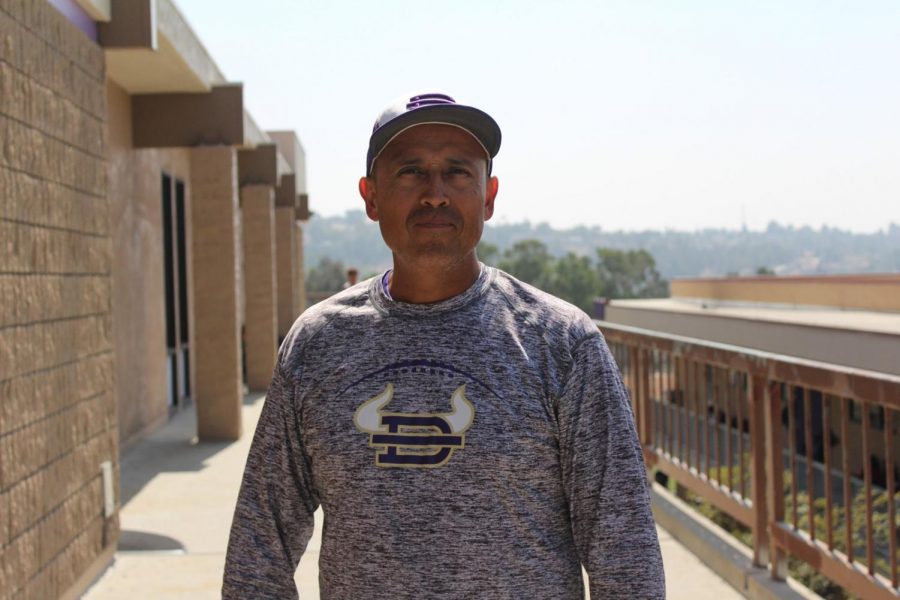 Dave Hernandez, Diamond Bar High School athletic equipment attendant, was recognized by the Diamond Bar City Council on Sept. 18 for assisting an unconscious driver in an intersection in May.

On May 29, Hernandez was driving home when he noticed that a car, which had come from the No. 2 left-turn lane on Grand Avenue, had stopped in the middle of the intersection of Grand Avenue and Diamond Bar Boulevard.

“I thought that [the car] had broken down. [But] when [the driver] smeared blood on the window, that’s when I knew it was a very serious accident,” Hernandez said.

Hernandez was in the No. 2 lane heading east on Diamond Bar Boulevard when he maneuvered his truck behind the stopped car, blocking the two left turn lanes on Grand Avenue so he could help the driver in the vehicle.

“I opened her door, she plopped out, I pushed her back in her car and she was covered in blood, head to toe,”  Hernandez said. “Her hands were sliced open, flayed, puncture wounds all through her torso, her legs. There was blood all over the car.”

After he had reached the driver,  Quail Summit custodian Mary Lou Vargas arrived at the scene. She told Hernandez that the car’s engine was still on, so Hernandez held up the victim as Vargas reached over to shut the car off and put it in park.

“[The driver] passed out again and I lifted her head with my hands and then kind of patted her cheeks and told her, ‘You gotta stay awake, stay with me,’” Hernandez said.

He called out and asked if anyone had called 911. When he saw three people raise their hands, Hernandez resolved to stay with the driver and keep her awake until the emergency personnel arrived.

Police cars, fire trucks and the ambulance arrived within minutes to address the situation and aid the woman. When the police asked Hernandez what had happened, he told them he did not know, since he only witnessed one piece of the series of events that led to her current state.

“I was really confused because she was covered in blood, but there was no broken glass in the car and no damage to the car,” Hernandez said.

The next day, Hernandez asked a police officer about the incident and learned that the driver was a stabbing victim whose husband had allegedly tried to kill her. When her husband thought he had succeeded, he fled to Chino Hills before being arrested by police.

After being attacked, the injured woman crawled to her car to get away. She made it to the intersection before she passed out from the loss of blood. Her car stopped, and Hernandez showed up soon after.

While other cars honked and drove around her car, Hernandez noticed blood smeared on the car window, prompting him to help the woman. As a minister, he thought about the Biblical parable of the good Samaritan aiding the weak man who was left unheeded by other people.

“You see a person in need, do what you can, keep yourself safe, and that’s why I parked my truck the way that I did, otherwise now there [would be more] victims,” Hernandez said.

According to Hernandez, the victim is recovering but nobody knows where she is. Her children attended schools in the Walnut Valley Unified School District until she pulled them out of the district and left her home, he said.