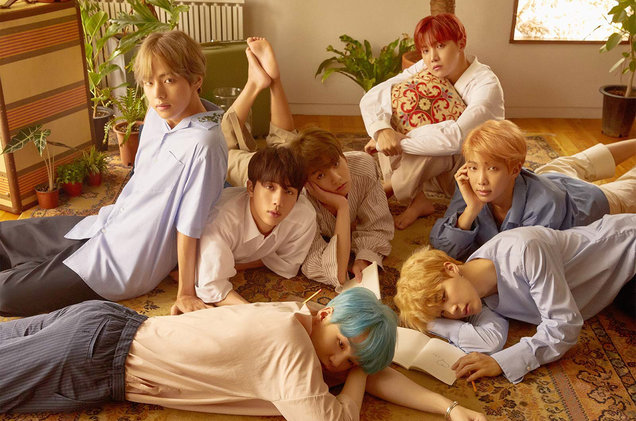 Only ten months after the “Wings” album release, seven-member K-pop group BTS has been breaking records left and right with their latest album, “Love Yourself: Her.”  On the day of its release on Sept. 18, “Her” hit No. 1 on iTunes’ top-selling album chart in 73 countries and territories, with the album pre-orders from Korea alone exceeding 1.5 million.

These statistics are hardly surprising as, upon my first time listening to the album  I was completely blown away by both the sound versatility and the lyricism.

BTS’s album concept is “Love Yourself,” offering a take on the notion of love in different contexts. Straying far from their typical witty social commentary, many of the songs in this album are about loving the group, loving yourself, and falling in love with other people. Although many fans are still a bit skeptical about such a drastic change, I feel this was a good break from their usual heavy-hitting sound and dark, profane lyrics. They pull off romance quite well, as they do have a considerable amount of love songs scattered throughout their previous albums.

“Her” consists mostly of songs that blend two or more styles — unsurprising since BTS has always had a penchant for genre-bending. What stood out most, however, was the lively feel the entire album has, an extreme contrast to their last album which consisted mainly of slower songs and solos that showcased the member’s individual vocal and rapping abilities. On the other hand, “Her” is geared more toward demonstrating a cohesive group dynamic.

The more romantic songs, including “DNA,” “Dimples,” “Best of Me” and “Intro: Serendipity,” all have a heavy EDM influence.  In “DNA,” the accompanying guitar riffs and interesting whistle hook definitely gives it the appropriate catchiness for a title track.

“Best of Me” is a much anticipated collaboration between Western artists The Chainsmokers and BTS. Though the track possesses a distinct Chainsmoker influence, it’s infused with a great deal of BTS’s hip hop and versatile rhythm change-ups that seem to really outshine the beats that the Chainsmokers contributed.

“Dimples,” sung by the four vocalists Jimin, Jin, Jungkook and V, is a sweet and pure ode to the endearing facial feature the song is named after.  My favorite part of this one was definitely the somewhat cringey pun, “that dimple is illegal, so I call you ille-girl.”

Lyric wise, the songs “Pied Piper”, “Go Go”, “Mic Drop” and “Outro: Her” were the most intriguing.  With a funky synth punk vibe combined with BTS’s unique take on hip hop, “Pied Piper” is a critical message for all the BTS fans who waste time and money obsessing over the group when they should be studying or working instead.  They insist that their songs should be seen as a reward rather than an addiction.

Meanwhile, “Go Go” has a very trap, tropical sound infused with a touch of reggae.  The lyrics are one huge satirical passage about the younger generation’s lifestyle choices.

In contrast to the group’s other love songs, the lyrics of “Outro: Her” are bittersweet, addressing how some people love to the point that they’re willing to change until they are no longer themselves. It was a nostalgic track, as I found this sort of topic reminiscent of what their older love songs tend to cover.

Though every song was a great listen, what hit me the hardest were the hidden tracks “Hesitation and Fear” and “Sea.” They touch on how the boys joined a nearly broke company, how they almost didn’t debut after living and training together for years, how they worry about their future and how they know that one day their popularity will fade. And though someday they will no doubt lose their fame, currently, BTS’s growth as a group show no signs of slowing down — especially with this particularly catchy and emotional new album.