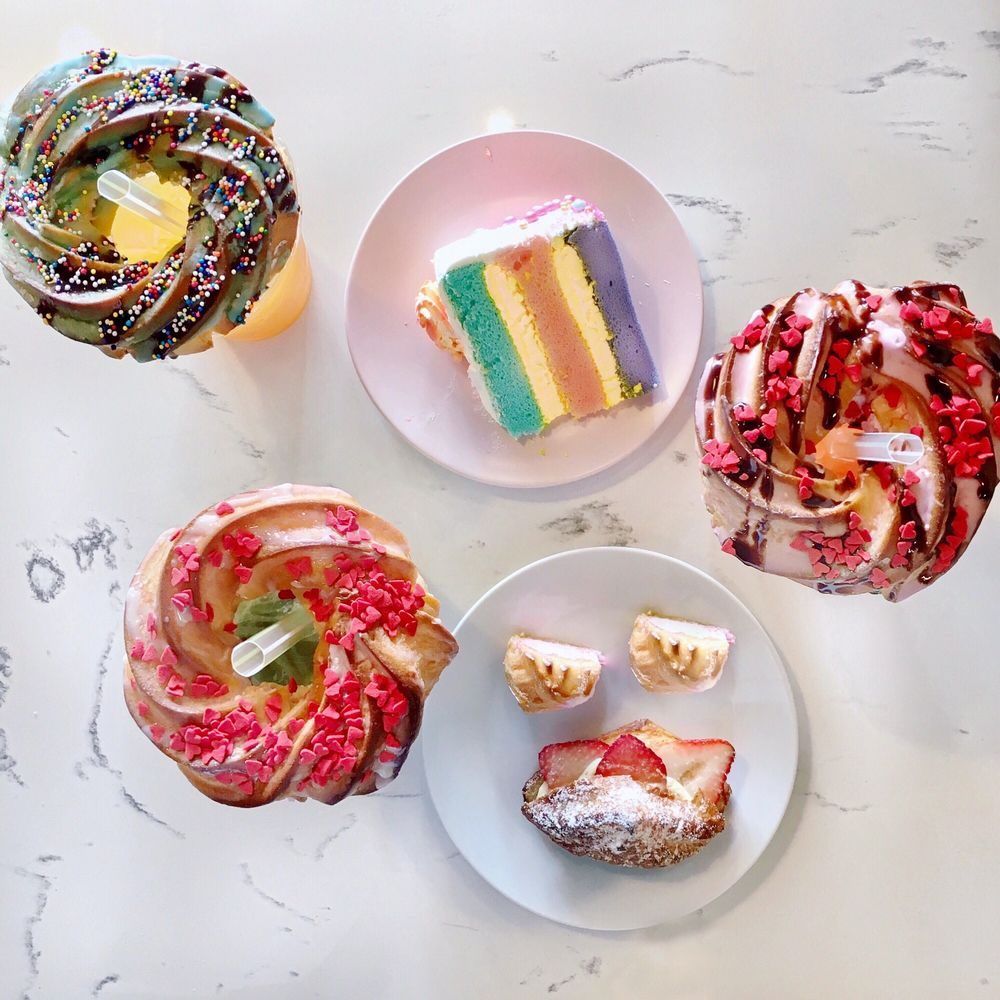 Well-known for its massively over-the-top drinks and aesthetically pleasing interior, Caked LA is perfectly suited for those with a sweet tooth. Yet this well-decorated bakery, widely popular across various social media sites, ultimately falls flat in flavor for its steep price.

My friend and I arrived on a late Saturday afternoon. As soon as we walked in,  I was drawn to the chalkboard wall decorated with paper flowers and the store’s logo, a background  seen in numerous social media posts.

The staff was friendly, and as my friend and I continued to stare at the menu items and the photos that accompanied them, the cashier immediately offered to explain the different kinds of drinks and other sweets offered. The drinks range from iced sea salt coffee to extravagant milkshakes decorated with a marshmallow unicorn horn. Pastries such as cream puffs, cakes and macarons are also sold.

After hearing a description of the drinks, my friend ordered the Rainbow Crush, a blue and pink lemonade drink that was topped with whipped cream, candy sprinkles and various candies, for $7.25 as well as a slice of rainbow cake for $6. I ordered the Rainbow Caked LA Cloud, a cold drink of your choice surrounded by a mound of cotton candy, for $5.70 and an ice cream macaron for $4.55. I selected  the matcha milk tea as the base of my cloud drink. The total was a bit pricey, and it was definitely more than I had anticipated.

Within a couple of minutes, our cake arrived, and the rest of our order soon followed. As soon as I stuck my fork into the treat, I noticed the texture of the cake was much denser than I expected, and it tasted as heavy as it felt. The frosting tasted like a semi-sweet vanilla, which canceled out the blandness of the cake. The texture of the cake was more off-putting than the taste of the frosting, which was a bearable vanilla flavor. Both the frosting and cake had a significant artificial food coloring flavor and did not taste like anything special.

Customers could personalize the macarons by choosing between four different macaron shell colors: white, blue, purple and pink, and a choice of vanilla, green tea, rocky road or cookies and cream ice cream. We ultimately decided on the purple with Fruity Pebbles macaron shell and a cookies and cream ice cream filling. The filling was rich and paired well with the crunchy macaron shell. It was not overbearingly sweet and helped me to cool from the hot weather outside. Although the cake was disappointing, the ice cream macaron satisfied my sweet tooth.

The drinks came out last and both were lavish in appearance. We were told to mix the Rainbow Crush drink, and the blue and pink layers blended together with some of the whipped cream on top to create a milky pink appearance. The slightly sour lemonade was a welcome change from the sweet streak my friend and I had from the macaron and cake. We somehow managed to finish the half gallon drink but left the candy toppers untouched.

Unlike the Rainbow Crush, the matcha Rainbow Cloud drink was a bit of disappointment. Although the cotton candy cloud was freshly made with the store’s cotton candy machine, the matcha milk tea tasted more of caffeine than tea. When I took a sip, I expected the familiar green tea flavor to wash over my tastebuds, but it tasted strangely more like coffee than matcha. I would order the Rainbow Crush over the milk tea since it was a refreshing, light taste in comparison to the rich matcha drink.

The restaurant  as well as its desserts were pleasing to the eye, but the quality of the drinks and pastries was not worth the amount we paid. Altogether, the ginormous cotton candy covered matcha tea and the rainbow coloured cake offered an interesting experience, but I would recommend visiting a different dessert spot after a meal unless you solely want to take some appealing photos with some gimmicky sweets.