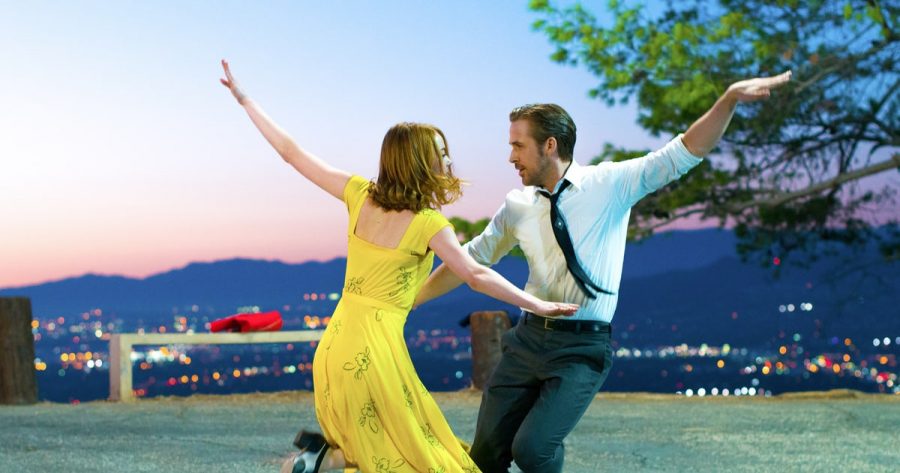 Decades ago, while in its prime, Hollywood churned out musicals by the dozens, many considered to be classics to this day. Director Damien Chazelle’s “La La Land” pays tribute to those traditional films, bringing a modern spin that will excite the new generation of musical fanatics while offering  nostalgia to those who lived during Hollywood’s golden days.

Set in contemporary Los Angeles, “La La Land” focuses on struggling actress Mia (Emma Stone). Through a series of chance encounters, she begins a relationship with Sebastian (Ryan Gosling), a jazz pianist who hopes to open his own jazz club. Their relationship is put to the test due to their differing ideas of success, but they are ultimately able to show each other that while following dreams is not always easy, overcoming difficulties makes success all the more worth it.

As the main characters, Stone and Gosling have fantastic onscreen chemistry. “La La Land” is not their first movie together, and their understanding and ease with each other is quite evident. Their skilled acting makes it easy to become quickly invested in the story that they tell.

The movie’s soundtrack is one of the major highlights. The first two numbers, “Another Day of Sun” and “Someone in the Crowd” are upbeat and incorporate large ensembles, which makes for exciting dance scenes. “A Lovely Night” is passive-aggressively flirtatious and presents a charmingly light-hearted atmosphere. “City of Stars” is beautifully romantic, especially as a duet. But the best song, “Audition (The Fools Who Dream),” presents heartfelt lyrics about dreaming and youth that almost anyone will be able to relate to. The only song that viewers may find hard to like is John Legend’s “Start a Fire”–it felt out of place, but this awkwardness was likely intentional and fit in with what was happening in the plot.

While the songs are fantastic, the film would have been even better if there had been more of them. The only two large ensemble performances are both over toward the beginning of the film, which was one of the only disappointments.

Overall, “La La Land” far exceeded my expectations, being a perfect balance of classic and contemporary that will make its way into the hearts of people from all generations.